Up to now, public support for wind power has been very strong in Germany. But recent changes to German law have encouraged local groups that oppose wind farms. The relegation of competence from the national to the state level means that smaller groups have a larger impact. Craig Morris explains.

“Hardly a wind farm is built now in Germany without public resistance,” an industry insider recently told me. Yet, onshore wind power remains the second most popular source of electricity in the country. So what happened? 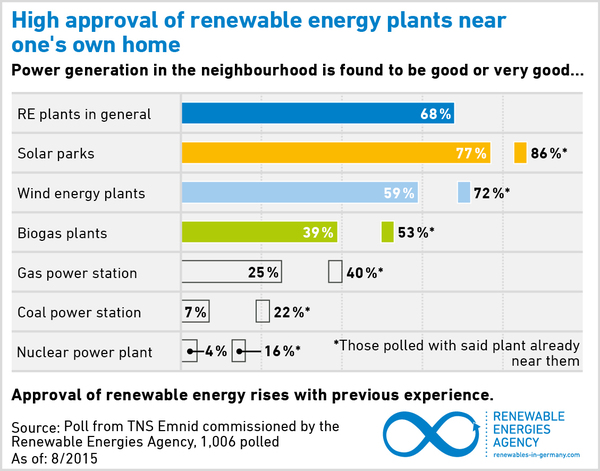 The general feeling seems to be that a change to the Construction Act of 2014 gave small groups a way to impact local politics. Called the Länderklausel, the passage specifically allows a state to specify the minimum distance between a turbine and the built environment, for instance.

Bavaria responded with its 10H rule, meaning that a turbine has to be 10 times further from a building than it is tall (measured from the tip of the top blade). With the biggest units now reaching heights of 200 meters, those units would need to be two kilometers from the nearest building. This month, a court ruled that the requirement – which is still unique in Germany – is not unconstitutional because it still leaves 1.7 percent of the state open for wind farm development. But not all of that land has good wind conditions, so the sector itself speaks of 0.05 percent of the state that is now both suitable and open for development (report in German). At any rate, the rule has brought wind power development to a standstill in the state; only four new wind turbine permits were granted in the first quarter after the 10H rule.

The court also argued that not all turbines need to be so big, but the small ones are generally only used along the coast. The taller the turbine and the longer the blades, the more reliably each unit generates electricity. This trend to bigger turbines is global and crucial. Bavaria is moving in the wrong direction here.

The bird discussion is back

Encouraged by such guidance, anti-wind groups around the country have gone into action. Too small in number to affect anything nationally, they have a great effect locally. The state of Brandenburg, for instance, officially wants to nearly double the installed capacity by 2030, but a group of citizens is challenging this policy. By July, they need to collect 85,000 signatures, but in the first three months of the six-month campaign they only collected around 23,000 (report in German).

The wind power sector itself recently reviewed the literature on bird populations and found that the main ones under concern have increased in population since 2000. During that timeframe, Germany moved from just under 10,000 wind turbines to around 24,000. However, German nature conservation organization NABU, which has successfully challenged several projects, points to other numbers and accuses the wind sector of trying to downplay a serious bird population problem (PDF in German). NABU says wind turbines have become the main killer of birds ahead of even buildings and cars based on a long-term study conducted in the state of Brandenburg. The wind sector counters that a study on the island of Hiddensee only found that 18 red kites had died from a collision with wind turbines (report in German).

The issue quickly becomes one person’s word against another’s. Exaggerations occur on all sides. For instance, one wind campaigner claims that red kites are simply shot when they interfere with airplanes landing or taking off at Stuttgart’s airport (report in German). When I called the airport to get an exact number, I was therefore surprised at the answer: zero. “We do not shoot with live ammunition,” the spokesperson told me. “In addition, shooting is the last resort anyway. We keep the grass high and do other things so that birds don’t feel safe here and stay away voluntarily.”

In the end, it’s important to remember that wind turbines are built for a reason: to generate electricity. If you want electricity, you have to decide how much, and then you have a few options: nuclear, coal, natural gas, solar, wind, etc. Too often, opponents of wind power seemed to think they can choose between pristine landscapes and industrialization with wind turbines. But those are not your options. The other power sources also affect the natural world.

Communities and citizens should have the ability to help shape infrastructure projects that will affect them – including blocking them altogether. And wind farms do need to be properly sited with respect to nature. If the debate is conducted with civility, wind power will prevail. Not surprisingly, another environmental group, Friends of the Earth Germany (BUND), speaks of wind power as “the working horse in the Energiewende” on its website (in German).