Last week, German media reported that the shutdown of a reactor in Fessenheim, France, should have been classified at a level of greater danger. While the German media focus on the event itself, French media have turned the issue into a “he said, she said” dispute. The coverage reveals the tradition of transparency in Germany – and the lack thereof in France. By Craig Morris.

Update: Housing Minister Emmanuelle Cosse now says (in French) that Fessenheim will be closed this year. It is unclear how this issue falls under her mandate. If true, one immediate effect could be that the important questions listed below might never be answered.

On Friday, March 4, two German media outlets – WDR and Süddeutsche Zeitung – broke a story on the shutdown of a reactor in Fessenheim, located directly on the German border, in 2014. The title of the article at Süddeutsche Zeitung read “Failure at Fessenheim nuclear reactor was more serious than previously thought”; the one at WDR, “Nuclear accident apparently covered up.”

Both reports refer to a letter sent by French nuclear safety authority ASN to the reactor’s director. It explains the findings of its review. Essentially, water had entered an electrical cabinet, damaging some equipment. Engineers were then unable to move the control rods used to ramp the reactor up and down. In order to shut off the plant, which had essentially become uncontrollable by normal means, boric acid was poured into the reactor for an emergency shutdown. Both German reports cite German nuclear expert Manfred Mertins, who says that he knows of no other such emergency shutdown using the introduction of boric acid in Europe.

When I first saw these reports, I assumed that an insider had leaked the letter to Mertins, who had then gone to the German press. I wondered who was behind the leak and why that person, no doubt a Frenchman, would contact a German instead of someone in his own county. Then, I would want to know whether the German was right – did French officials play down a nuclear incident?

French journalists have not focused on these questions, but rather on German coverage of it, especially German Environmental Minister Barbara Hendricks’ subsequent call to shut down the reactor. Instead of asking French officials about the alleged cover-up, the French reporters ask what the officials thought of Hendrick’s comment. French coverage turns the whole matter into an insipid “he said, she said” dispute. Here are some article titles from major French papers on Friday:

One could hardly fault French readers for thinking the Germans shouldn’t get so huffy. None of these titles even hint at what the problem might be. Perhaps not surprisingly, the title that comes closest to what the German press is reporting comes from an article published by L’Alsace, the newspaper serving the region of Alsace bordering Germany, where the reactor is located: “Failure played down in 2014, say German media.”

The problem with most French press reports is that they give readers the impression that the dispute runs along national lines, with the Germans asking the French to do something France doesn’t want to do: shut down Fessenheim. The real issue, however, is whether the incident in April 2014 was indeed played down.

French journalists should have contacted their German colleagues to get the letter that German expert Mertins comments on. “No one from the French media have contacted me,” Jürgen Döschner of WDR told me when I contacted him. And there was no leak; the letter has been online for almost two years (PDF in French from the source). The passage in question is the following:

The second sentence reads: “Because the control rods could not be moved, only boric acid was used to lower the reactor’s primary power.” The wording itself is strange, as several French colleagues of mine have confirmed. Most readers will stumble over the French “borification,” but my trouble is with “only” and the verb. I would’ve expected the verb to read “had to be.” As it stands, the sentence sounds like “only something small was done” rather than “something completely unusual had to be done.” One French colleague, an expert in nuclear technology who confirmed that my word-for-word translation is accurate, says the verb in French should have been “could”: “only boric acid could be used – there was nothing else to be done. It was the only option left.”

“Borification” is the introduction of boric acid to the reactor. The process is called “poisoning the reactor.” Adding boric acid to a reactor that has lost control of its control rods is extremely rare. There are some 440 nuclear reactors technically in operation worldwide (including the roughly 40 not currently producing power but not officially shut down either in Japan). I could only find two previous instances of such an event. One of them was at Fukushima; the other, at Kosloduj, a reactor in Bulgaria.

The story from Bulgaria is illustrative (PDF in English from a nuclear watchdog organization). When three of six control rods in a cluster did not move, “workers pumped boric acid in to prevent a chain reaction.” Just to be safe, the engineers then decided to conduct an emergency shutdown – only to find that 22 of all 60 control rods remained “stuck in the highest position.” They flooded the reactor with boric acid.

The story was initially covered up, being reported only as an INES 0 incident. The International Nuclear Event Scale (INES) goes from 0 to 7. A whistleblower reported the matter to German daily Tagesspiegel (report in German), and a subsequent investigation raised the category to INES 2.

The ASN categorized the event in Fessenheim as INES 1, not INES 2. Is there a big difference between the event in Bulgaria and the one in France? That question would be an excellent one for French media to investigate. INES 2 is partly defined as “significant failures in safety provisions but with no actual consequences”; French media should call on the ASN to explain why the inability to move control rods does not constitute a “significant failure in safety provisions” – and why the emergency shutdown using boric acid was apparently not reported to the International Atomic Energy Agency (IAEA). This press release (in French) make the event sound relatively harmless; there is no mention of boric acid being needed. Indeed, the wording makes it sound like only system A was damaged, whereas system B (the redundant backup) worked perfectly, suggesting (incorrectly) that the control rods were controllable the entire time. Another item that deserves investigating is whether the use of boric acid damaged the facility in any way; apparently, this can be an issue.

This different focus between German and French media speaks volumes about the different culture of transparency pertaining to nuclear issues in the two countries. It is noteworthy that the Bulgarian incident also first went public in German media. This time, French media failed for 23 months to realize that they have a potential story on their hands.

Of course, German Environmental Minister Hendricks has to repeat her call for Fessenheim to be shut down ASAP under the circumstances; she protects the interests of Germans. (Disclaimer: I live 21 km from the reactor as the bird flies.) Fessenheim is the oldest reactor in France and the only one literally on the German border (though others are quite close.) But in reality, the French nuclear sector is probably happy that it is being asked to respond to German calls for Fessenheim to be closed. As long as we keep talking about that, less attention is paid to the real issue of a potential cover-up. 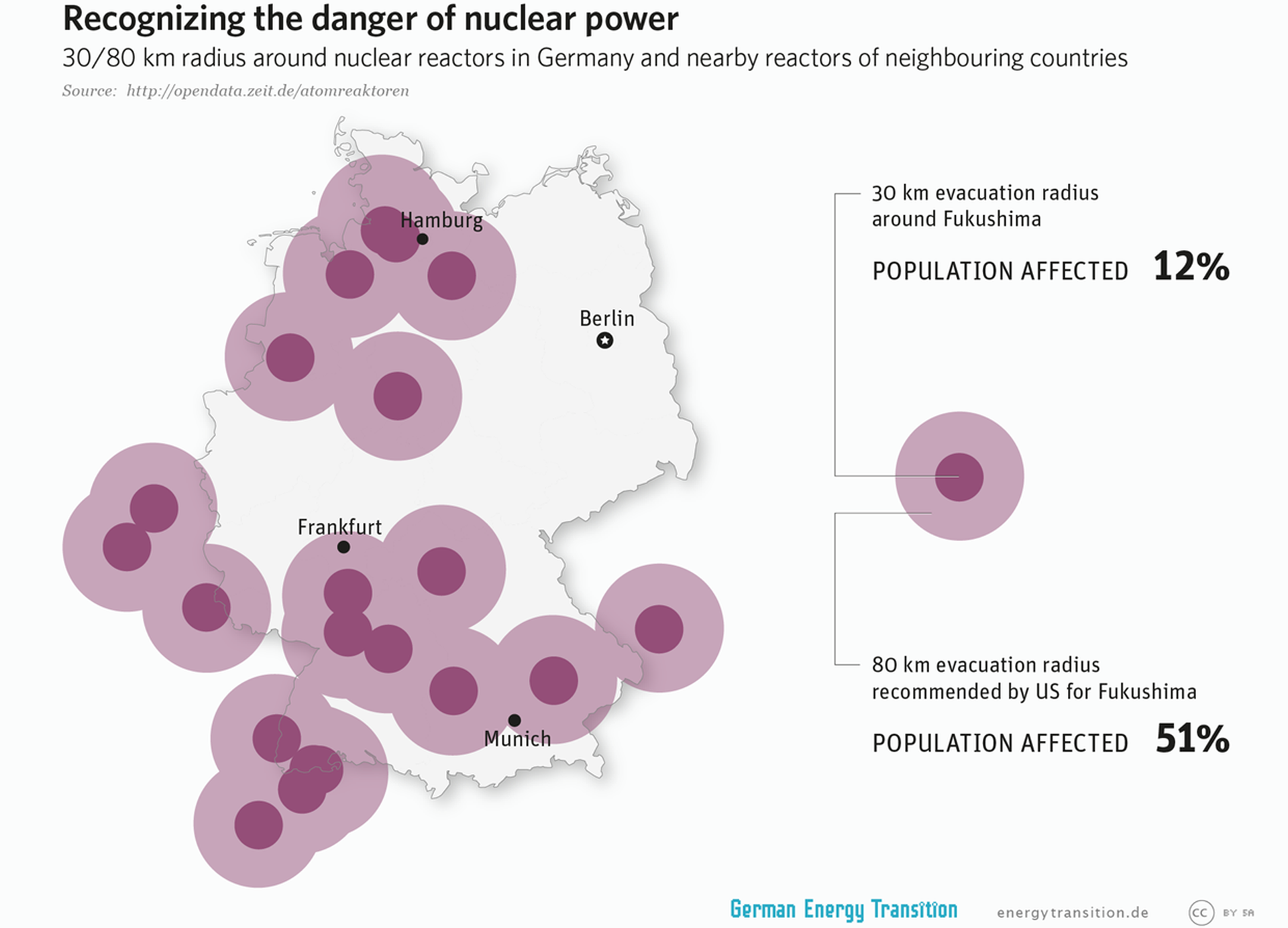 Yes, the Germans have reasons to be concerned about Fessenheim. And yes, the French public deserves greater transparency as well.

The issue is especially touchy at the moment for the French nuclear sector. Fessenheim is to be closed whenever the new reactor at Flamanville is completed – if it ever is. Otherwise, French Ecology Minister Ségolène Royal wants to extend the service life of the French nuclear fleet by 10 years (report in French), probably including Fessenheim.

Furthermore, there are increasing calls for a follow-up reactor of the Flamanville design planned in the UK to be abandoned, and a similar project in Finland doesn’t look so good either. All of this is putting a strain both on Areva, the builder of the reactors and France’s national champion for engineering, and on EDF, the country’s power provider. EDF has lost some 90 percent of its share value since 2008, and Areva has looked basically bankrupt to financial experts for the past year as the company fails to sell further reactors. The last one was sold in 2007.

Having put all of their eggs in the nuclear basket, France now has trouble stepping away from it. Maybe the recent event in Fessenheim can be categorized as INES 1, and maybe even INES 2 does not mean that Fessenheim should be closed. Or maybe, given its reliance on nuclear, France cannot afford to ask whether a simple non-nuclear accident – water damage to electrical equipment – led to the use of boric acid, which may have aged the country’s already oldest reactor even further. Borated water led to problems at the Davis-Besse reactor in the US a decade ago, and that facility did not even have an emergency shutdown like Fessenheim did (and yes, the whole thing was covered up).

The French press should start asking tough questions and stop making this a “he said, she said” issue between allegedly anti-nuclear Germans and the French. Don’t do it for the Germans; the French themselves deserve better than reliance on their German neighbors for investigative journalism.