Coal prices are at rock bottom, and coal companies have been hurt badly. (Photo by Marcel Oosterwijk, modified, CC BY-SA 2.0)

What a year 2015 was – for fossil fuels! Goldman Sachs coined the term “peak coal,” for instance. Whereas peak oil means oil production cannot be ramped up further, peak coal means demand will drop. China in particular is reducing its coal consumption, which largely impacts coal imports to the country (it continues to consume domestic coal). 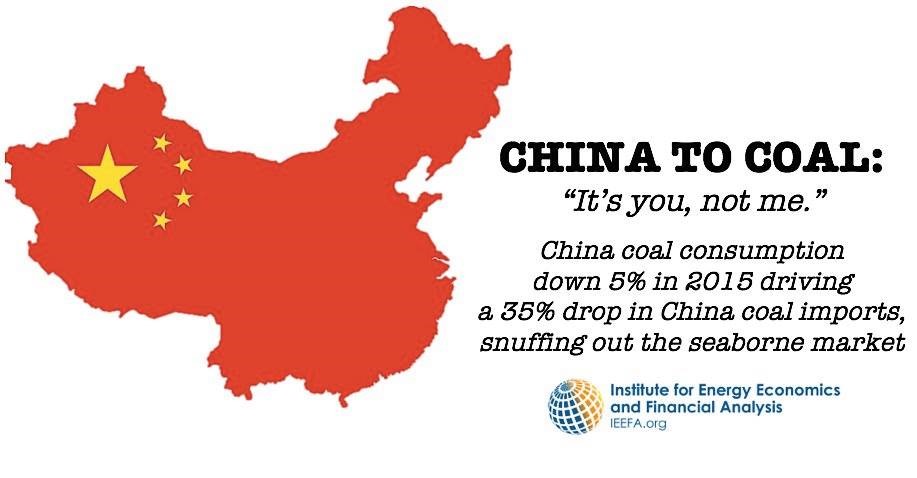 As a result, coal prices are at rock bottom, and coal companies have been hurt badly. For instance, the share price of Peabody Energy, the largest coal company in the world, dropped by 90 percent between December 2014 and December 2015. One cause is the global divestment movement. In 2014, 0.05 trillion USD in divestment from fossil fuel resources had been pledged. At the climate conference in Paris, the number rose to 3.4 trillion.

Conventional wisdom has it that low fossil fuel prices will increase demand for fossil fuel – and decrease investments in renewables. The details, however, are a bit messier. Most renewable investments pertain to wind and solar power, and hence to electricity. Oil prices do not impact those investments much because so little oil – just a few percentage points worldwide – is used for power generation. Low oil prices will therefore mainly disincentivize biofuels for transportation and renewable heat options (solar thermal, biomass, heat pumps, etc.).

Coal and natural gas are different. They are both widely used in the power sector. With coal prices down a third in the past two years and natural gas prices so low that US shale gas firms are going bust, demand should be turning away from renewables and towards coal and gas. It isn’t. Why not?

Maybe it’s time we started thinking of renewables as a driver of fossil fuel demand – instead of the other way around. Countries around the world have varying fuel costs, especially for natural gas, which can be several times more expensive in Japan than it is in the US. Americans were therefore hoping to set up liquefied natural gas terminals to export gas to Asia. The problem was that the shale gas boom largely took place towards the East, so Californians themselves had a hard time benefiting from the country’s shale gas boom. A lot of infrastructure needed building, and that took time. Now, it seems that low prices came before the infrastructure could be built.

From the investor’s perspective, the problem is therefore the volatility of fossil fuel prices. It’s risky. And the assets need to remain in operation for decades to be profitable. Compare that to wind farms and solar arrays, where around 95 to 99 percent, respectively, of the total cost over 20 years is known on day one. Renewable energy investments are much less risky.

Governments also have their reasons to go renewable. The Chinese can’t breathe. Nor can the Parisians and Italian urbanites. In European cities, the problem is clearly diesel vehicles, whereas the Chinese suffer from both coal and oil pollution. Governments are therefore clamping down on coal and oil.

Theoretically, demand for oil in the heat sector should rise. In Germany, heating oil is currently 27 percent cheaper than wood pellets, for instance (source in German). Nonetheless, oil consumption in the German heating sector is unlikely to increase because the German government practically banned oil-fired heaters in new buildings and renovations this year; instead, renewable heat is required.

So the growth of renewable energy is likely to limit demand for fossil fuel and eventually reduce it, which will keep down the prices for coal, oil, and natural gas. Until recently, low fossil fuel prices would have been expected to slow down the transition to renewables – according to conventional wisdom. But maybe, just maybe, renewables are now in the driver’s seat.