Global trade prices for coal have fallen even more than the price of oil (Photo by Hubert Berberich, modified, CC BY 3.0)

At the end of September, a 900 megawatt coal plant approved by Günther Oettinger in July 2009 went into operation in Mannheim. At the time, Oettinger was Minister President (Governor) of the state of Baden-Württemberg; he later went on to become Europe’s Energy Commissioner. Brussels-based Carbon campaigner Mark Johnston suspects that this permit was the last one granted to a coal plant in Germany – more than six years ago.

German environmental non-profit BUND used to produce a map of coal plants in Germany and their status: planned, completed, blocked, and discontinued. But the map does not contain a clear list of the permit dates. BUND’s Tina Loeffelsend, who oversaw updates of the map, was not certain that the Mannheim plant was the last permit granted, though it could be – but she also points out that two other permits are still pending for coal plants elsewhere in Germany, and a third might also be applied for.

The most up-to-date map on German coal plants can be found in the Kohleatlas (Coal Atlas – to be published in English in November 2015) co-published by the Heinrich Böll Foundation (which runs this website) and BUND (PDF in German). Below, we see that it is entitled “The last of their kind.” Because it is from April 2015, it still has the Mannheim plant listed as “under construction.” The color scheme is as follows: 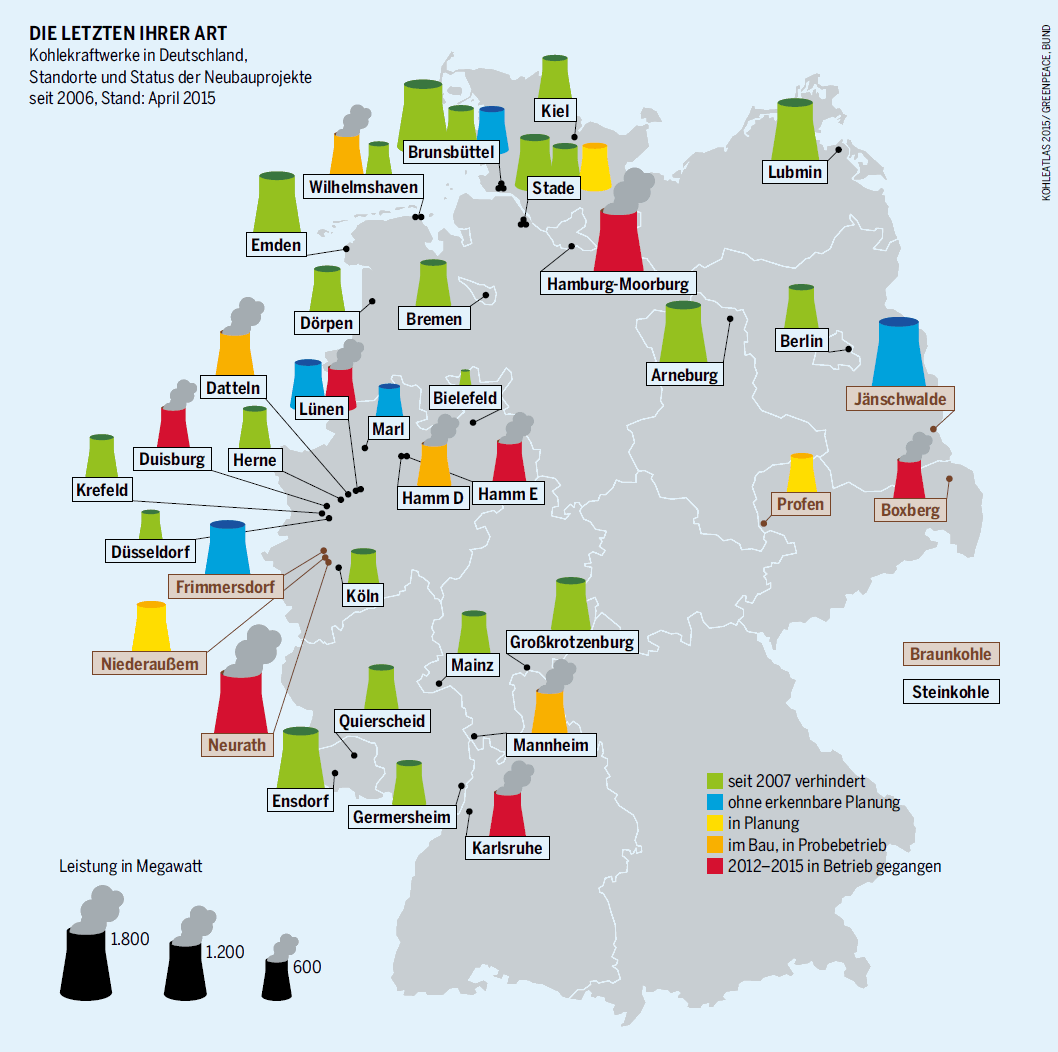 Germany’s Network Agency also published an update of nationwide plans for further plant decommissions and new builds; the chart below is taken from that Excel file (our translation). There is clearly some hard coal in the pipeline along with natural gas. But no lignite plants are on the drawing board, and overall conventional generation capacity is expected to drop by 4,368 megawatts by 2019 (including two nuclear plants). Installed hard coal capacity could increase, however. But note that some of that is under “year uncertain” – an indication that the firm may yet step away from the project. 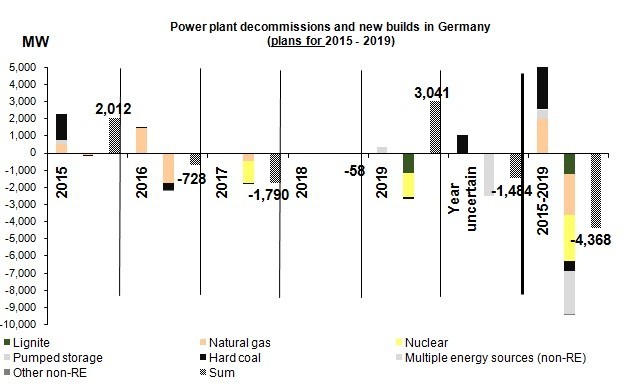 The installed lignite capacity seems likely to decrease, and there is other news as well: at the end of September, Sweden’s energy giant Vattenfall announced plans to step away from its lignite assets (including coalfields) in Germany, with Czech energy group CEZ being a possible buyer. Roughly 2.7 gigawatts of coal plants are to be shut down in the Czech Republic by 2020, and the country is currently considering closing some of its coal mines.

Germany’s lignite fields are part of a larger area of resources stretching into the Czech Republic and Poland – the heartland of coal in Europe. The Czech government says it is clamping down on coal because of climate emissions; likewise, the government in the German state of North Rhine-Westphalia also officially limited the Garzweiler lignite field last month (report in German).

But increasingly, the climate may not be the only reason; these coalfields may become unprofitable. Bloomberg reports that Poland may have to bail out its coal mines. And it remains to be seen what price Vattenfall wants for its German coal assets – and what CEZ is willing to pay.

One reason is – to my great astonishment – “peak coal.” Goldman Sachs recently told its clients, “Peak coal is coming sooner than expected.” The world is not running out of coal, however; rather, demand is peaking. Global trade prices for coal have fallen even more than the price of oil has. One major reason is that China is importing a lot less. The Chinese have realized that they are choking on their own pollutants. The switch to wind and solar power is therefore making itself felt there. China already has by far the most wind power capacity in the world (roughly 50 percent more than the United States) and will soon take over Germany for installed solar capacity.

Other reasons include divestment, which has hurt the bottom line of North American coal firms. The share price of Peabody, a US-based global coal giant, now fluctuates wildly.

None of this is to say that the battle against coal has been won yet. But honestly, I didn’t see any of this coming, and reports of the coal sector’s dire situation globally continue to come in. It’s good news for the upcoming climate summit in Paris. Maybe there is reason to hope – finally.