On July 25, Germany surpassed the old record of 74 percent renewable electricity. But perhaps the most interesting aspect is power trading between France and Germany on that day. Craig Morris explains.

At the end of July, the storm Zeljko passed over northern Europe, causing considerable wind damage and flooding in some areas. Here in southern Germany, however, it was a relatively sunny day. In the north, where it was windy, Germany has most of its wind turbines installed. In the south, it has most of its solar. The combination of sunny weather in the south with strong wind throughout the country is rare – and led to a new record. 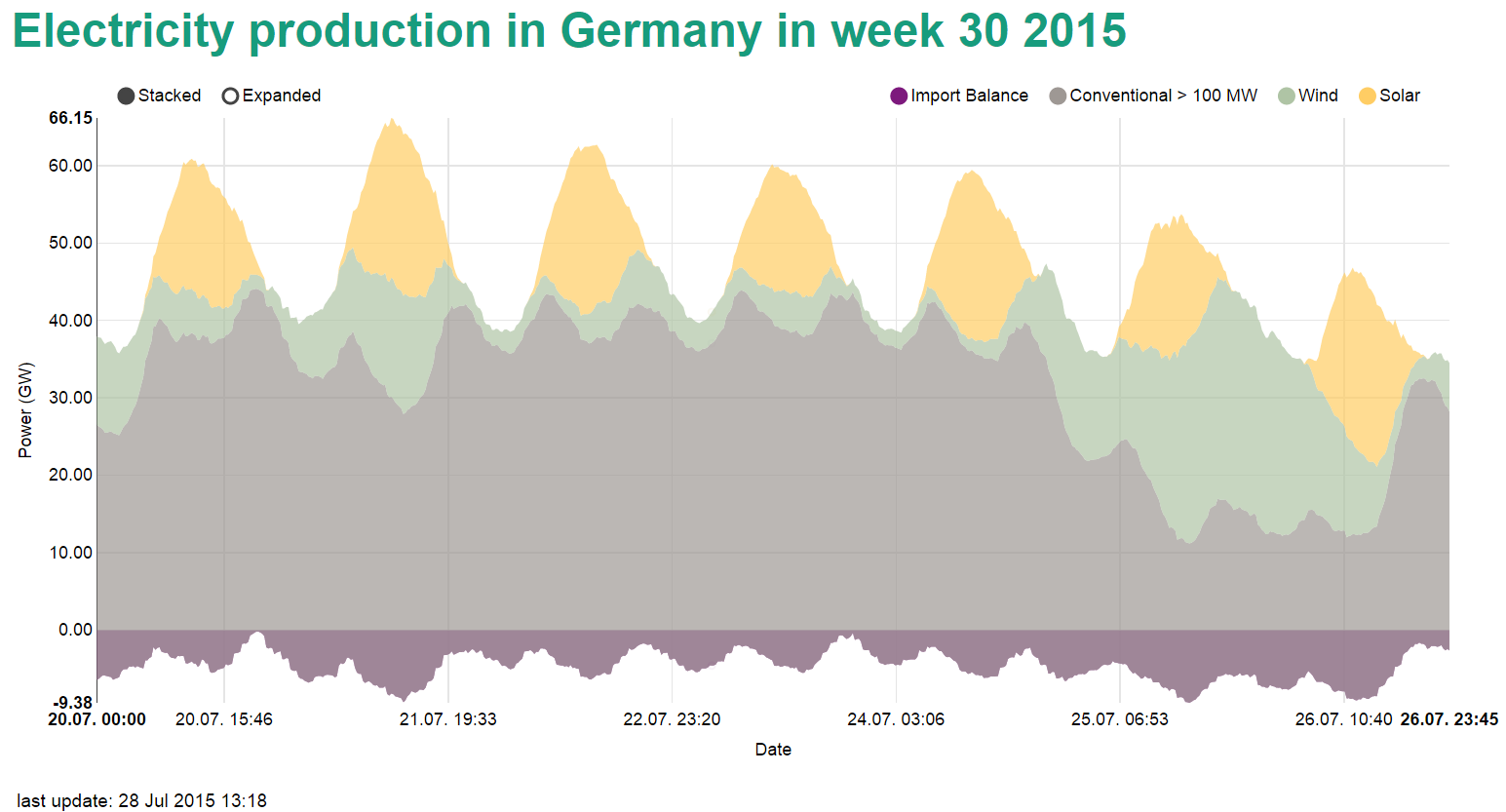 At the end of week 30, there was a rare combination of a lot of solar and wind power simultaneously in Germany. Source: Energy-charts.de

The chart above visualizes the situation well, but we still need to include biomass (4.85 GW) and hydropower (2.4 GW). The total renewable electricity on Saturday afternoon was therefore 47.9 GW. We then also need to exclude the 8.75 GW of net power exports below the baseline in the chart above to calculate total domestic power demand, which then comes in at 61.1 GW. In that calculation, Germany had roughly 78 percent renewable electricity as a share of domestic demand for a few hours.

The figures are still preliminary, however. On the Energy Charts website, you can switch from the view above to “all sources,” and you get slightly different (lower) numbers for both wind and solar during the exact same timeframe. In addition, the data will probably still be tweaked because they are so new. But in all likelihood, further revisions will still have a new record posted that day. The preliminary figures given at Agora also have renewables making up 79 percent of domestic power consumption that day.

We don’t need to look far for a very low share of renewables, however. In the wee hours of July 22, wind power dropped to 2-3 GW, with solar at 0. Add in hydropower and biomass, and we have around 9.5 GW of renewable electricity out of just under 40 GW of domestic demand. In other words, it is now hard for renewable electricity to be pushed far below 25 percent of domestic demand in the summer. 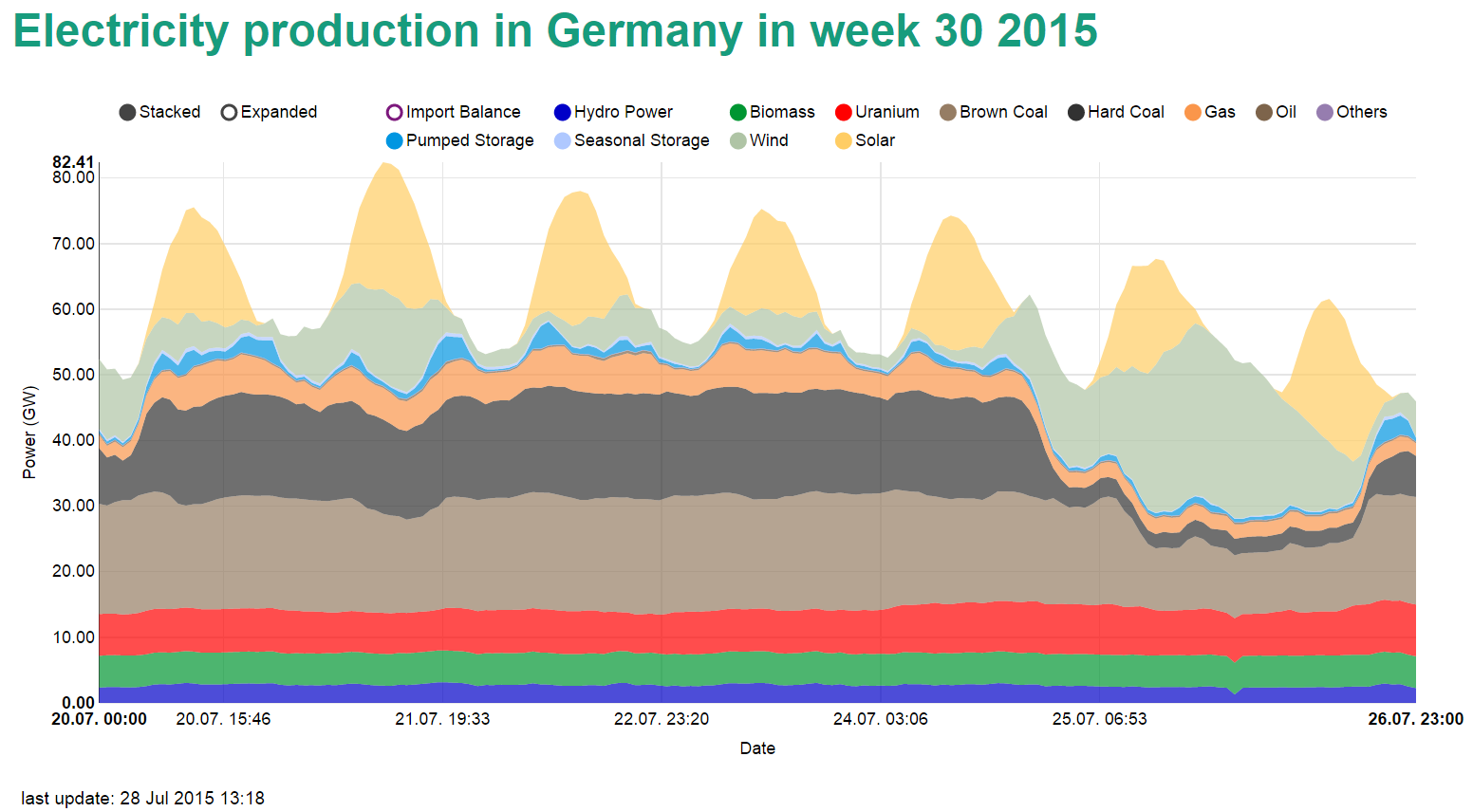 A view of week 30 shows that hard coal adjusts the most to fluctuating demand, followed by lignite. In contrast, nuclear remains relatively stable. Source: Energy-charts.de

Though Germany was a net exporter of electricity at the time, the trading situation with France is illustrative. The chart below from French grid operator RTE shows that France was a tremendous net exporter of electricity on Saturday, July 25 – at a time of low power demand. During the early morning, Germany (orange bars on the left) imported a tremendous amount of electricity – not because it needed it, but because French nuclear plants do not like to ramp down any more than the German ones do, so they were selling power to the Germans cheaply. This situation once again disproves the common notion that Germany can “rely” on French nuclear when it needs power. In reality, trading takes place based on price, not dire need to prevent blackouts. The Germans import nuclear power when demand – and hence the spot market price – is low. 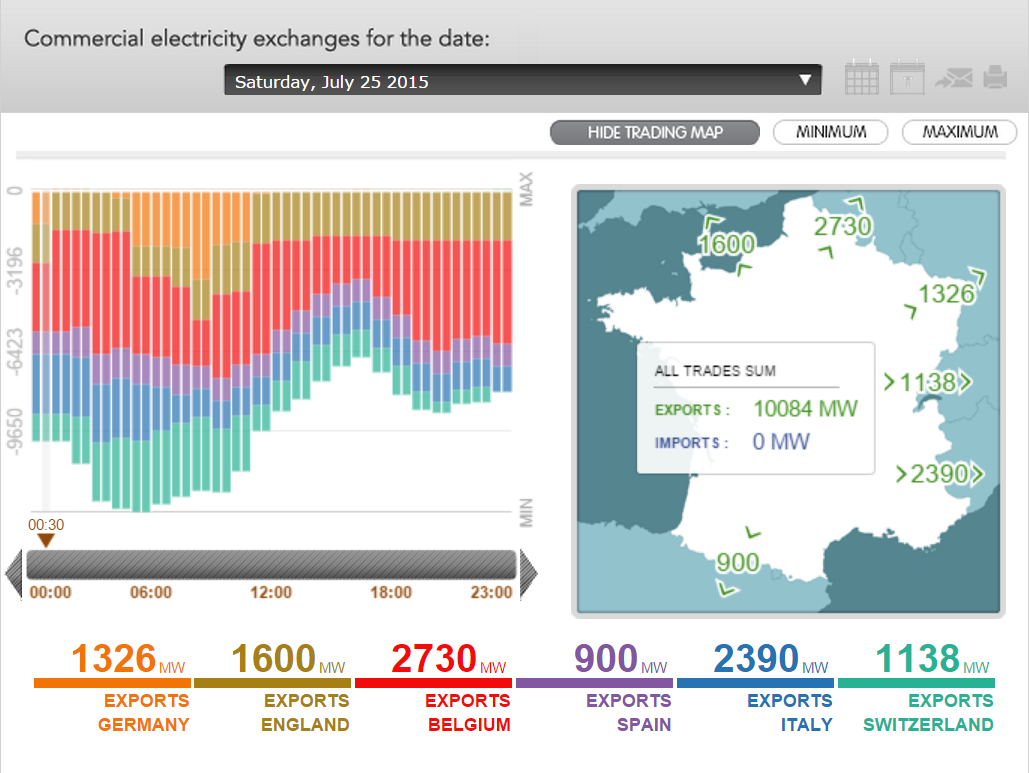 France exports electricity when demand is low. Note that during this entire day the French did not need to import any electricity, which would otherwise have shown up above the baseline on the left. Source: RTE

A look at the trading prices reveals in fact that the German prices were a bit higher that Saturday. Peak and base prices averaged around 1.5 cents per kilowatt-hour in the Phelix zone (Germany and Austria), whereas French prices were closer to two cents. At those prices, the French should have been importing from Germany – but there simply was no need, and any imports would have forced the country to ramp down its nuclear plants even further. It’s further proof of the fundamental incompatibility of inflexible nuclear power with fluctuating wind and solar.