It’s back again – the claim that Germany will rely on foreign base load, especially nuclear, in its energy transition. Craig Morris wonders why proponents of nuclear power understand the technology and markets so poorly.

Turns out that the myth of German dependence on French nuclear is not much more than hot air: Even when German power demand reaches its peak, it exports power to France. (Photo by Les Meloures, CC BY-SA 1.0)

Two recent online articles suggest that Germany might be conscientiously relying on imports of nuclear power from abroad to prevent blackouts at home. Over at Breaking Energy, Roman Kilisek writes:

“Germany may rid itself of significant base load capacity (back-up power sources for intermittent renewable sources if adequate storage capacity does still not exist at a later time), which then would be located across the border in neighboring countries such as the Czech Republic (nuclear power in Temelin) and France (nuclear power).”

He seems especially concerned about a stipulation in a recent agreement on further European cooperation in the electricity sector, spearheaded by Germany that the signatory states “will not restrict the cross-border electricity exchange, even in times of electricity scarcity.” The insinuation here is that Germany would not be able to ensure its own power supply when it shuts down nuclear, so it is in essence (as the article’s title puts it) “outsourcing its future energy security.”

And over at the Haas School of Business at the University of California at Berkeley, Maximilian Auffhammer wonders something similar:

“Is Germany this bold since it can always buy cheap nuclear base load from France if things go terribly wrong?”

There are two assumptions in these two articles: first, that Germany can import nuclear power when demand is high; and second, that Germany may lack dispatchable generating capacity in the amount needed to reach its own peak power demand. Both assumptions are wrong. 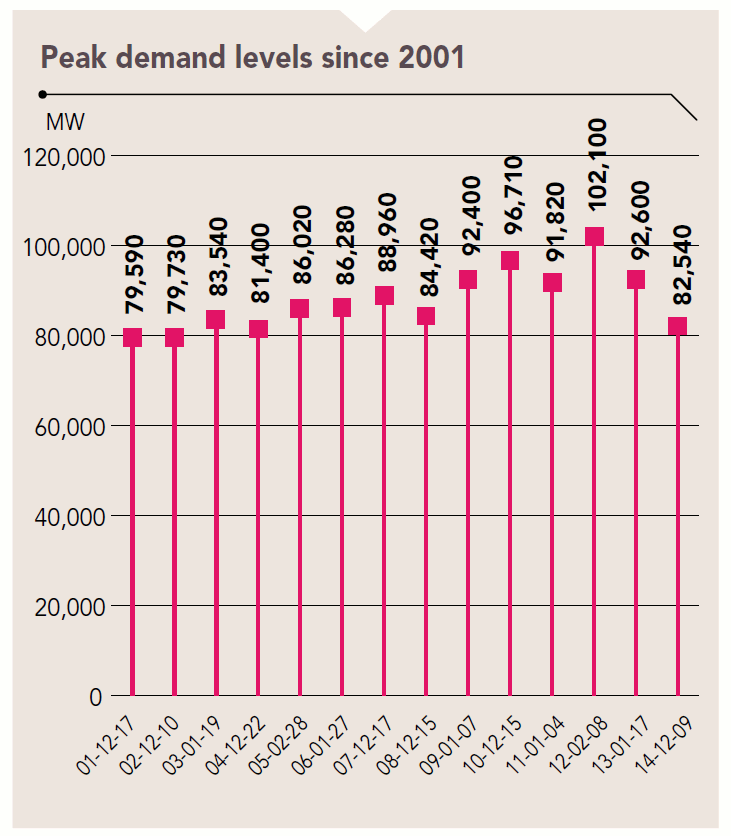 The first idea is raised over and over again to my astonishment. France has 63 GW of installed nuclear capacity, but its record peak demand topped 100 GW. In 2014, the peak was 82.5 GW – the lowest level since 2004, but also significantly higher than its nuclear fleet could reach. France cannot even rely on its own nuclear power fleet to cover its own peak demand, much less serve Germany’s. It is a physical impossibility for Germany to import nuclear power from foreign reactors already running full blast anyway, yet the claim that Germany is relying on foreign nuclear continues to rear its ugly head. In reality, every country with nuclear needs other plant types to cover peak power demand. Indeed, France is a major importer of power from Germany at peak consumption times, as we will see below.

Let’s now take a look at the second assumption that Germany does not have enough dispatchable capacity of its own. Below, we see an overview from Fraunhofer ISE’s Energy Charts. The dip in 2011 – the year of Chancellor Merkel’s nuclear phase-out – is clearly visible. But Germany has continued to add capacity over the past few years, and the level is back up to around 100 GW. 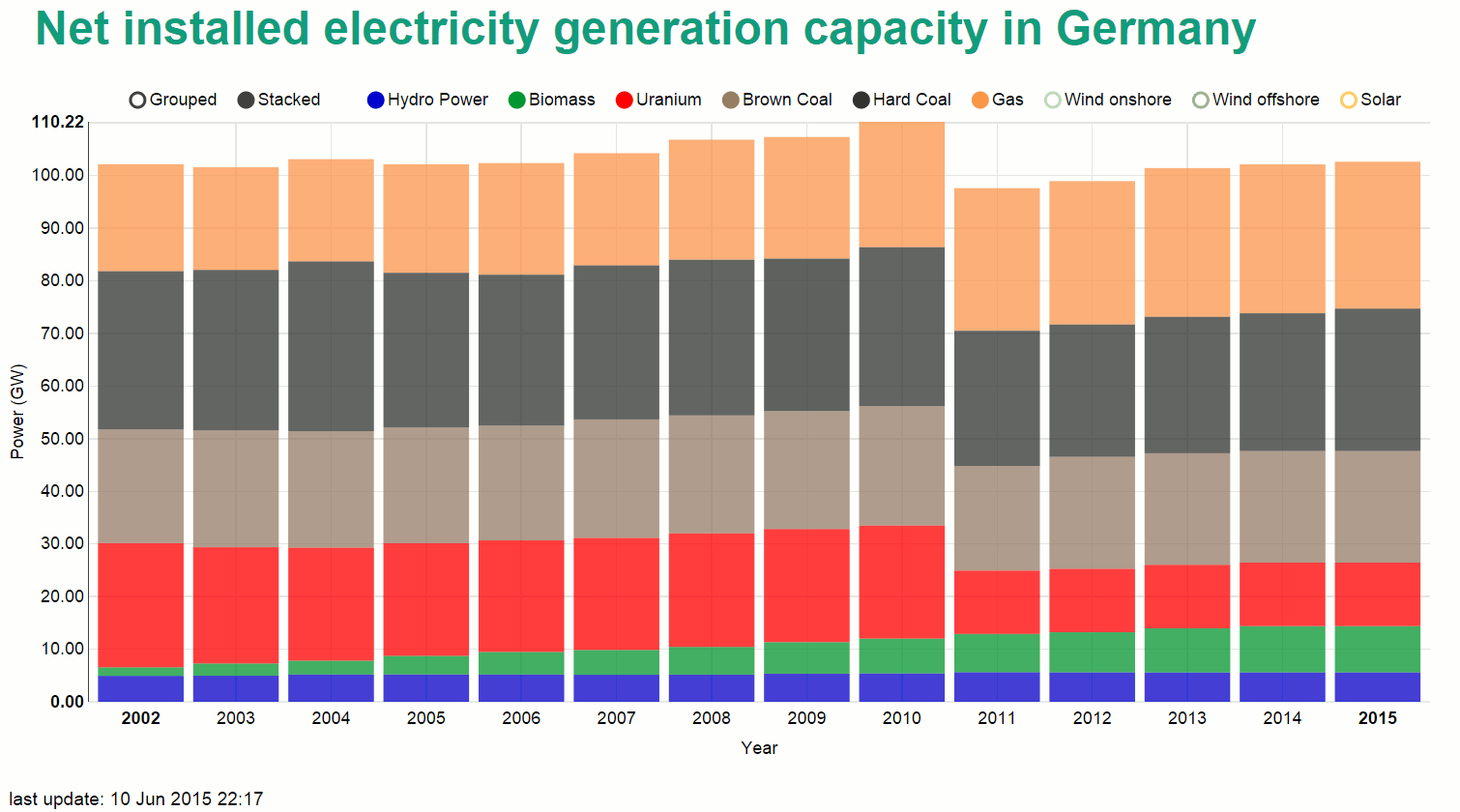 By 2022, Germany will remove the remaining roughly 12.7 GW of nuclear, and another 7 GW of coal capacity could also be switched off by the end of this decade, with little or no additional coal capacity in the pipeline. Let’s make the math easy – Germany stands to lose around 20 GW of dispatchable capacity over the next seven years, bringing the total down to around 80 GW.

In 2014, peak domestic power demand came in at around 75 GW, though it has historically been closer to 80 GW. Utilities generally like to have a roughly 10 percent reserve generation margin, but at that point, Germany would have around 80 GW of power plant capacity to cover possibly 80 GW of demand, so no margin – hence the discussion in Germany about a possible shortfall in power supply.

However, the country has seven years (until 2022) to prepare for this situation, and gas turbines can be set up in a few years. And note that the calculation assumes a 0% contribution from wind and solar power. Furthermore, if peak power demand continues to drop, Germany might not need any new power plants at all. Finally, the main bottleneck will occur in southern Germany, so the problem is local.

Let’s take a look at 2014 to see what the current situation is. As we see below, Germany exports more power to neighboring countries in the winter than it does in the summer. Power demand is higher in Europe in the winter, so Europe relies on Germany to meet peak power demand – the exact opposite of what the two articles mentioned above assume. 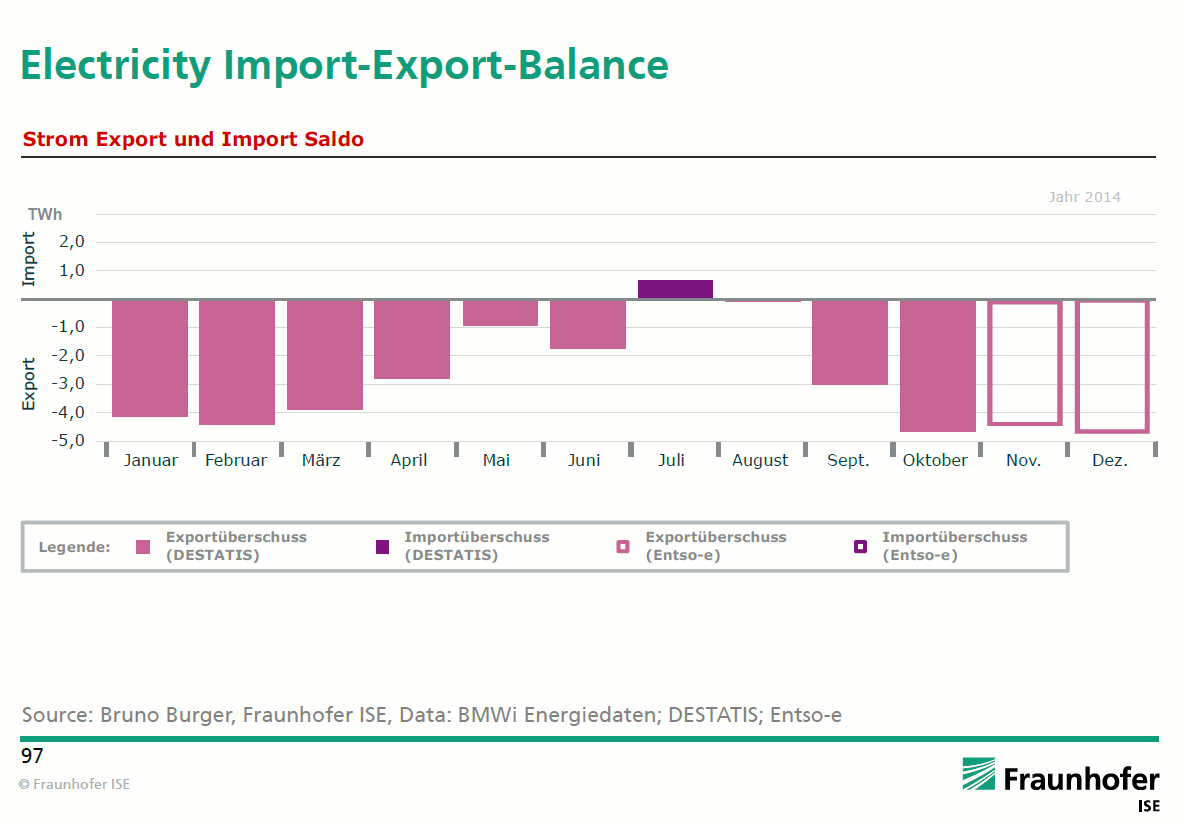 Production of conventional electricity in Germany peaked in 2014 on December 3 at a level of 63.8 GW (see slide 269 in this PDF). Note that this amount does not include roughly 10 GW of biomass and hydropower (see week 49 of 2014 under “electricity production” on the Energy Charts website); in other words, Germany had roughly 73 GW of dispatchable electricity generation that day.

Peak demand for conventional electricity in Germany coincided with massive exports to France. There is only around 4 GW of interconnection capacity between the two countries, but France imported around 3 GW during the hours of peak demand in Germany. If Germany could get rid of French imports during those hours, it would only have to cover 70 GW of power demand. In other words, to prevent blackouts in Germany, it would help if France would stop importing so much German electricity at times of peak demand. 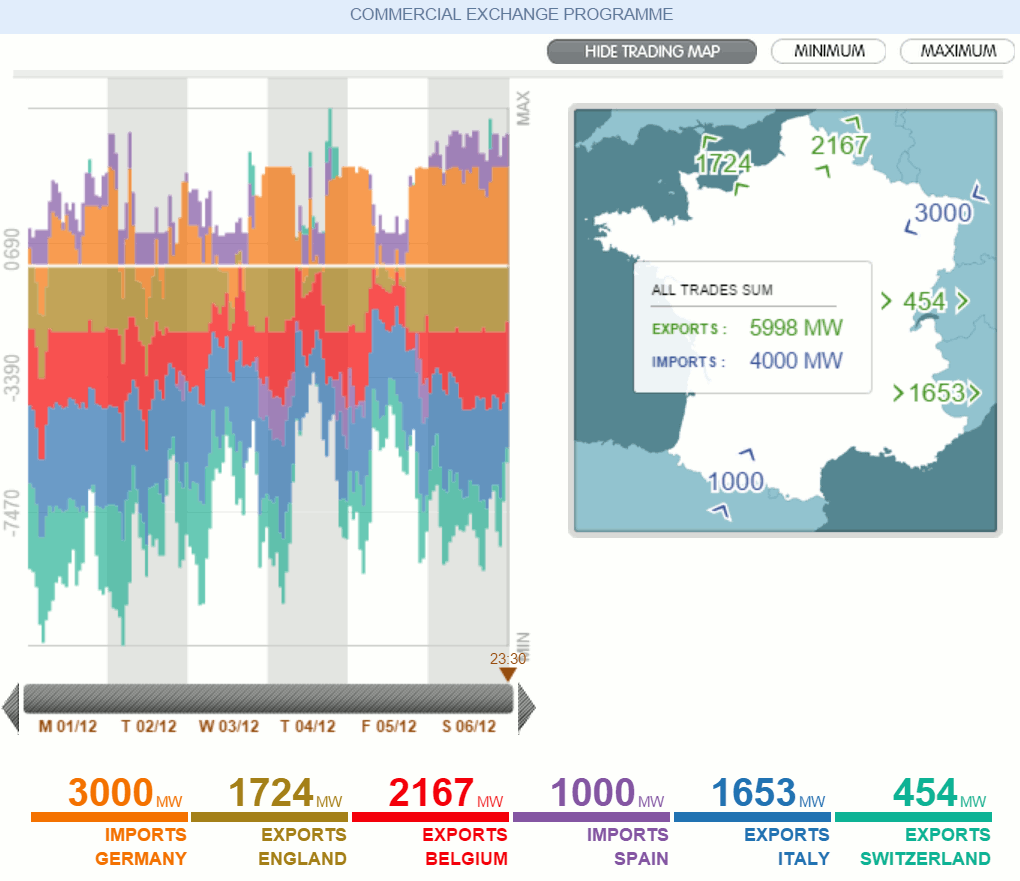 Commercial power trading between France and neighboring countries at the beginning of December 2014. As the chart on the left shows, France was a major importer of electricity from Germany on Wednesday, December 3, the day of highest power demand in Germany. On the right, we see that Germany was the main exporter of electricity to France at the time. The major level of French power exports to Belgium was needed to cover failed nuclear plants in Belgium. Source: RTE

In a nutshell, France relies on Germany to cover its peak demand, not vice versa. There is, however, a risk of Germany decommissioning so much coal and nuclear capacity over the next seven years as to endanger the security of supply, but there is also enough time for the country to prevent this outcome. Right now, Germany imports nuclear power from France when the French need to dump excess nuclear generation at low prices – not in order to prevent blackouts in Germany.

Amazingly, energy experts continue to believe that the German nuclear phase-out is endangering power reliability elsewhere, with the most incredible claim being that even the UK’s supply security is at stake – although Germany has no power connection to the British Isles. The thinking seems to be: you can switch nuclear on, but you can’t switch wind and solar on, so the Energiewende must pose a risk of blackouts. The publicly accessible data used above tells a different, more complex story. So when Germany asks for power trading in times of “electricity scarcity,” it does so knowing that it is likely to continue to export to nuclear France during those times of scarcity.