The era of global coal expansion is coming to an end. Since 2010, the number of canceled coal projects across the world outstrips those that are completed at a rate of two to one. Still, too much power continues to be made from coal if mankind wants to achieve the 2 °C global temperature limit, argues Sophie Yeo.

The now canceled coal plants would have emitted 88,204 million tonnes of carbon dioxide over their lifetime. (Photo by Peabody Energy, Inc., CC BY 3.0)

The global coal boom has started to slow, a new report says, as more plans for new power plants are now being shelved than completed.

The number of cancelled coal projects across the world has outstripped those completed at a rate of two to one since 2010, according to Sierra Club and CoalSwarm – two campaign groups that have tracked the progress of 3,900 intended plants since 1 January 2010.

The findings update a 2012 report by the World Resources Institute, which estimated that 1,199 new coal-fired power plants, with a total capacity of 1,401 gigawatts, were in the pipeline for construction. 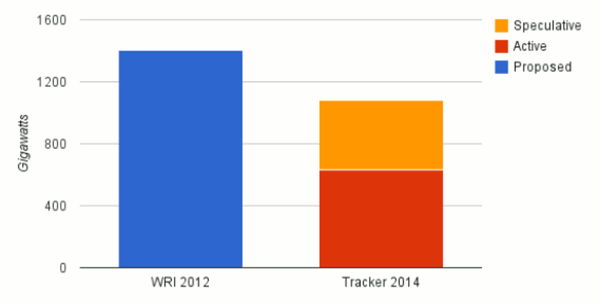 The report puts this down to citizen opposition, competition from renewables, new policy initiatives and political scandals putting a freeze on the highly polluting projects.

IEA figures show that in 2012, electrical capacity provided by coal was 1,805 gigawatts. Even adding the reduced 1,083 gigawatts that the two groups estimate are in the pipeline would go beyond the 1,999 gigawatts of coal capacity that the IEA says can be online in 2020 in order to stay within their two degree scenario.

Between 2010 and 2014, the groups calculated that 356 gigawatts of capacity was added to the world’s network of coal-fired power plants, while 493 gigawatts – or 624 individual power plants – were shelved.

These cancelled coal plants would have emitted 88,204 million tonnes of carbon dioxide over their lifetime.

The slowdown in coal expansion has been sudden and followed a period of rapid growth in the construction of coal plants. For around two decades, capacity increased at a stable rate of between 20 to 25 gigawatts every year. Between 2005 and 2012, this tripled.

The new report shows that it has now started to slow. This is supported by the IEA’s 2014 Medium Term Coal Market report, which said that coal growth in 2013 was substantially lower than the average rate over the last ten years. However, the IEA also stressed that coal continued to be the fastest growing fossil fuel. 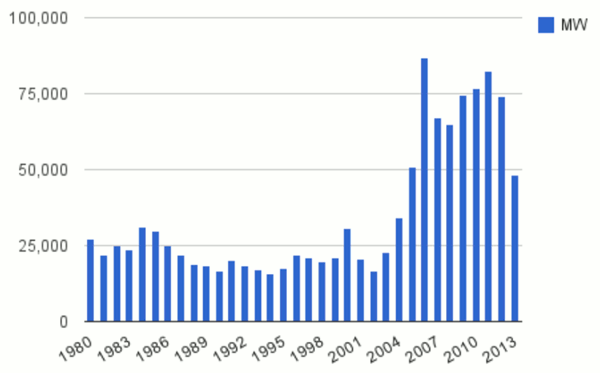 The successes and failures of the coal industry are unevenly distributed between countries and regions. 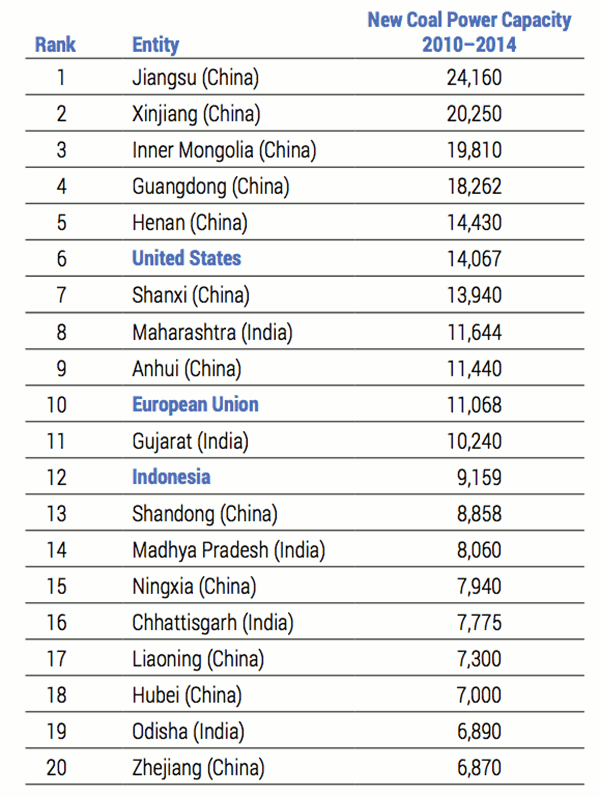 Five Chinese provinces individually added more new coal power capacity than the entire US between 2010 and 2014. Jiangsu, the Chinese province where construction of plants is most intense, has built almost as much new coal capacity as the whole of the US and the EU combined.

The highest proportion of coal projects were canned in Europe, where the failure rate was 7:1.

The lowest was in east Asia, where only one project failed for every success. And the majority of these were in China, where around 228 gigawatts were added between 2010 and 2014, compared to 119 gigawatts cancelled.

However, in terms of tonnes of carbon dioxide avoided, the cancellations in east Asia were more than double that of Europe, due to the sheer scale of projects being proposed in the first place.

In India, the story is of a particularly rapid slowdown in the rate at which proposed coal plants are being constructed. From the beginning of 2010 to mid-2012, the ratio of plants halted to plants completed was nearly 2:1. From mid-2012 to mid-2014, this increased to more than 6:1. The report puts this down to a variety of factors, among them the “Coalgate” scandal concerning the corrupt allocation of coal mining rights between 2004-9.

The coal industry in the EU and US is already in decline. In the EU, despite the addition of 14,469 megawatts of capacity, a further 17,580 megawatts were retired, leading to a net loss of 3,112 megawatts.

Not all proposed coal plants are equally likely to come to fruition. The report differentiates between projects that are already in an advanced state of development and those with less certain futures.

Around 635 gigawatts of the total 1,083 gigawatt pipeline appeared likely to progress towards construction, whereas 448 gigawatts was more speculative.

In the future, this could shift the geographical balance of where the coal industry has most success. Many of the most advanced projects are distributed across south Asia and Europe/Turkey, which means that these regions are more likely to see their proposed projects go ahead.

This report’s conclusions are an improvement on previous projections, but not enough to prevent global warming of more than two degrees Celsius. In 2013, the Intergovernmental Panel on Climate Change announced that the world had a “carbon budget” – an overall limit to the amount of carbon dioxide that can be emitted to prevent global warming exceeding this internationally agreed target. This budget was estimated to be 870-1,240 gigatonnes of carbon dioxide.

The combined, cumulative lifetime emissions of 842 gigatonnes emitted by existing infrastructure, as well as coal-fired power plants currently proposed or under construction, would almost be enough to singlehandedly blow the lower end of this budget, even if the current cancellation rate of 2:1 continued.

This means that even more projects must be canned in order to give the world a good chance of remaining below the two degree target.

A recent article published in the science journal Nature suggested that 80% of the world’s coal reserves need to stay in the ground to meet this goal. The IEA says that the amount of energy that the world gets from coal needs to fall by around a third by 2040 to aim for a less than two degree future.

The current rate of coal project cancellations is already causing a headache for investors in the industry, Ted Nace, one of the report’s authors, tells Carbon Brief:

“The clearest example right now is in coal mining stocks like Peabody, Arch, and Alpha Natural Resources. Arch’s stock, for example, hit $75 per share in 2008 and now sells for 88 cents per share. An individual or an institutional investor that invested $75,000 in Arch stock in 2008 would have lost over $74,000 in the past seven years.”

The decline in the European and US coal fired capacity growth has been taking place for over a decade, but mining companies had hoped that exports to China and other Pacific Rim nations would help to make up the difference. This has not happened. China’s coal consumption fell by 2.9% in 2014, while the use of existing coal plants dropped to 54% – a 35-year low.

Meanwhile, new renewable energy capacity exceeded new coal capacity in China for the first time in 2013, and then again in 2014 – although coal remains the dominant source of Chinese electricity.

The rate at which projects are being shelved in India has also had an impact on connected projects overseas, explains Nace:

“With capacity growth stalling in India, numerous overseas mega-projects such as mines, railroads, and terminals designed to increase imports of coal to India are now on turning into white elephants.”

The rate at which coal plants are being cancelled is an improvement upon previous estimates on the future growth of the industry.

But with international efforts targeted towards keeping global warming to below two degrees, the news that there is still 1,083 gigawatts of coal capacity in the pipeline is little cause for celebration.

Sophie Yeo covers climate and energy policy. She holds a masters in journalism from Cardiff University and studied English literature at Oxford University. She previously spent two years at RTCC, writing about the UN climate negotiations and international policy.