The outcome was roughly predictable at least as far back as January, but today Germany’s four transit grid operators (TSOs) announced the specific figure for the renewables surcharge for 2015. But the decrease is so small that retail rates might not even be affected. Will the government at least admit its new policies are not the reason? Craig Morris investigates.

The renewable energy surcharge will shrink in 2015, possibly lowering consumer prices – but the government should not boast this as their success. (Photo by Rudolpho Duba / pixelio.de)

Today, Germany’s TSOs announced that the “renewable energy surcharge” (EEG-Umlage) will be lower in 2015 than it is this year. It is the first time that the surcharge has shrunk. But the decrease is minimal at one percent; the surcharge will drop from the current 6.24 cents per kilowatt-hour to 6.17 cents. The 0.07 cent reduction will hardly affect the retail rate of around 29 cents.

Yet, over the 12 months from September 2013 to August 2014, Germany added nearly 2.4 gigawatts of PV on a power market a tenth the size of the United States, meaning that the US would have to install 24 gigawatts of PV in a year to reach the equivalent level. Furthermore, 1.7 gigawatts of wind power was installed in the first half of 2014, putting the country on course to top the previous record of 3.2 gigawatts set in 2002.

Given the continued fast growth, why is the surcharge shrinking? First, there is the simple fact that new renewables are now cheap and therefore do not add a lot of costs to power supply. And then there is the way the surcharge is calculated. Remember this chart from my article in January? 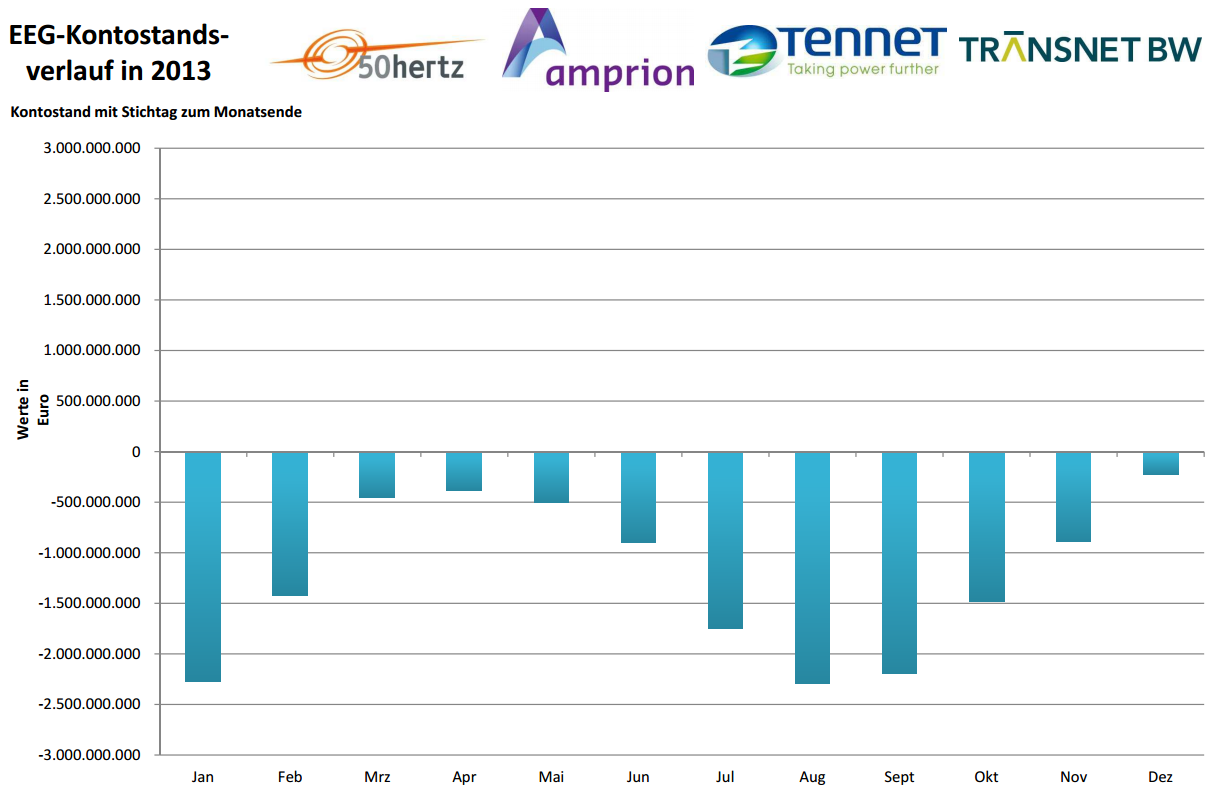 It essentially shows an account balance for renewable electricity. Feed-in tariffs are paid to producers of green power, and that power is sold by TSOs, basically at wholesale rates. The difference between feed-in tariffs paid and revenue from sales of green power is tacked onto the kilowatt-hour sold to power consumers as the renewables surcharge.

The fluctuations you see above represent the monthly overdraft/underdraft. In the winter, for instance, more wind power – the cheapest source of renewable electricity – is produced. But the surcharge remains the same for the entire year. So from January to March, renewable electricity is relatively cheap at a time when demand (and hence, wholesale prices) is relatively high. We therefore see money being paid into this account each month from January to March and again from August to December.

In return, the wind dies down in the summer, when solar power – historically, a more expensive energy source – kicks in. Power demand (and hence, wholesale power prices) is also lower then, so from April to August, money is taken out of the account.

The “renewables surcharge account” (EEG-Konto) thus represents the difference between the expected revenue from the renewables surcharge and feed-in tariff payments. It therefore reflects the deviation of actual revenue flows from expectations; it does not reflect anything like the total cost or the true cost. It simply shows how accurately the experts predicted a given year’s revenue flows. 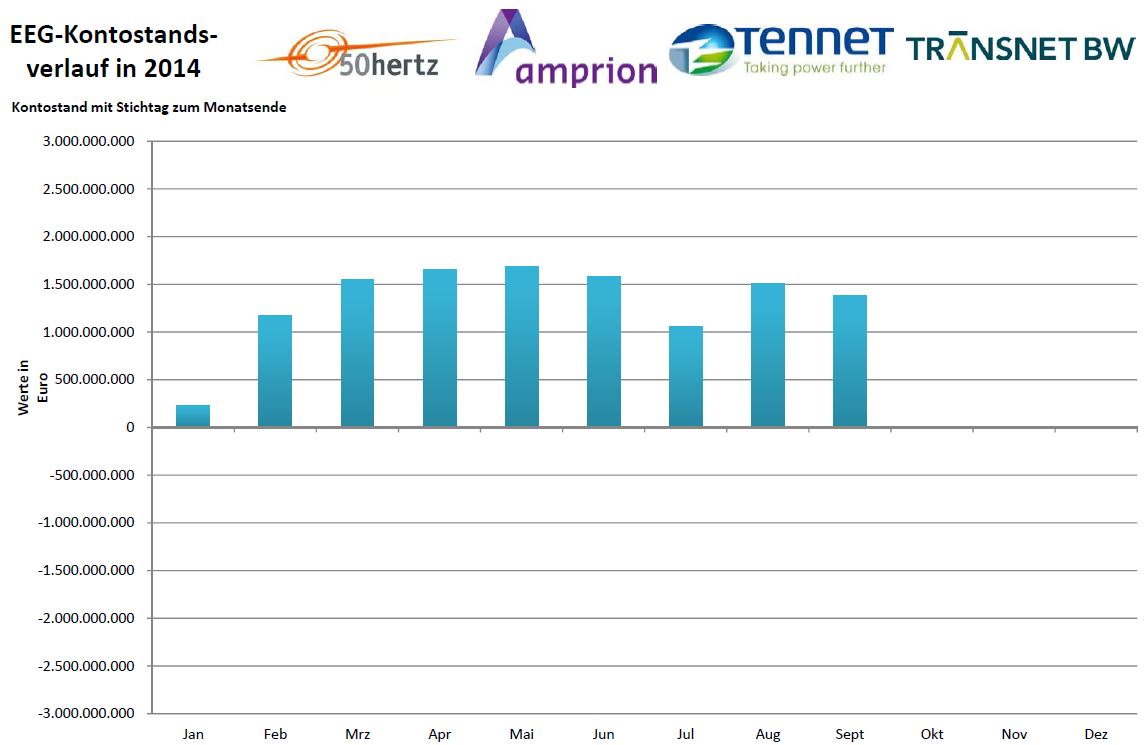 The account has been in the black the entire year. In contrast to last year, solar power production barely has an effect during the summer, with the account even growing positively from July to August.

The surcharge for 2015 announced today is lower because of two effects: first, the 2014 surcharge had a deficit to account for, whereas the one for 2015 does not; and second, next year’s surcharge no longer has to anticipate further deficits. Still, one wonders why a deficit of 2.2 billion euros in 2013 increased the surcharge by 0.96 cents, while the current 1.4 billion euro surplus only decreases it by 0.07 cents – a question for a future post.

Clearly, this outcome is the result of an historic situation, not the amendments that went into effect in August, which hardly had time to impact markets within the timeframe relevant here (October 2013 to September 2014). Still, a casual passerby might assume, given the close temporal proximity, that the new policies just made the Energiewende less expensive. This year, the German Industry Ministry twisted some similar numbers to overstate its aims. Fortunately, experts quickly exposed the misleading claims. Here’s hoping that, this time around, government officials will have the integrity to admit that this minor success is unrelated to their work.