Politicians from Central and Eastern Europe use wrong assumptions to justify new nuclear power in their region. They base their pro nuclear stance on an expected significant increase in domestic power demand and increasing wholesale prices. Jan Ondrich reports.

To make nuclear look like a sensible option, the Czech government resorts to unrealistic assumptions about the future of its power market.

Figure 1 shows expected Czech electricity consumption assuming 0.82% compound annual growth. The grey line is the government’s expectation of generation without new nuclear, the orange line with. The country would become a net importer without new nuclear by 2025. 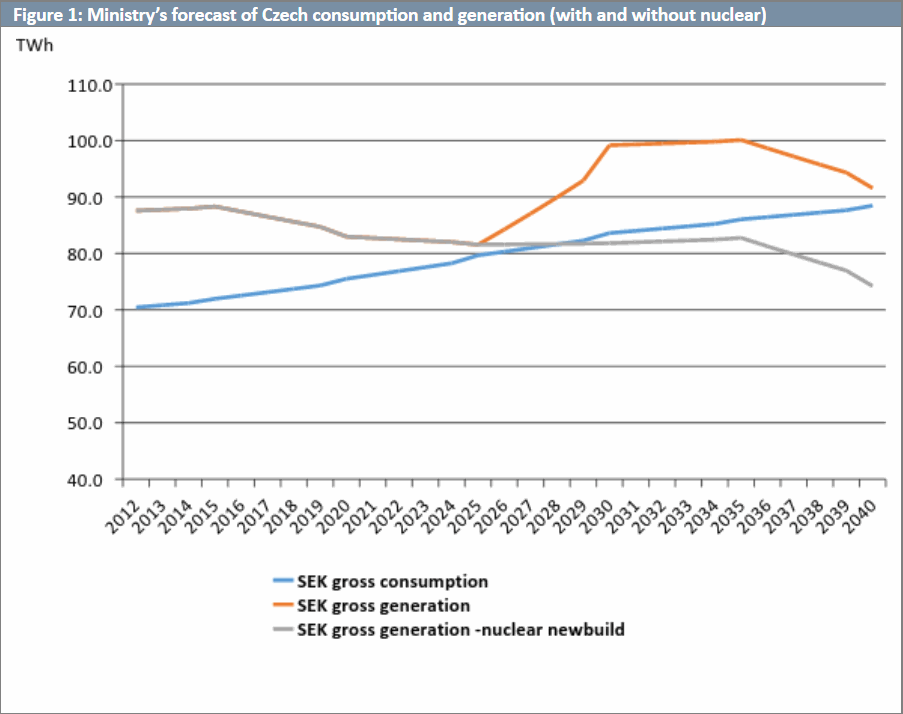 We disagree with the government’s predicted growth rate as well as with its assumption that to become a net importer of electricity is unwelcome. What is unwelcome about importing clean and cheap electricity from German wind and solar plants?

Figure 2 offers a more realistic outlook, with the yellow line revealing how Czech electricity consumption would look if it were to grow by the German compound annual growth rate of the past 10 years. Under this scenario, the Czech Republic would not need new generation capacity even after 2040. If consumption were to grow at the pace of German compound annual growth rate of the past 20 years (to account for the lower energy efficiency of the Czech economy), the country would become a net importer after 2038, by which time solar technology will be so cheap that it would be impossible for large scale power plants to compete for base load power.

In other words, if these new nuclear plants were ever to be built, they would be producing expensive electricity nobody needs. 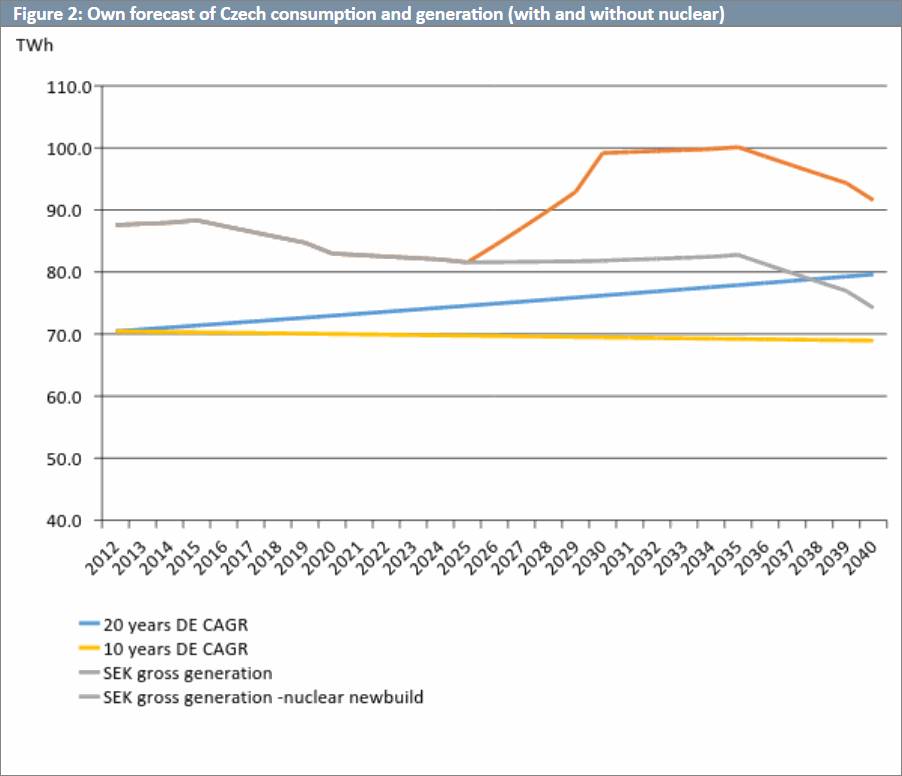 The second assumption, that electricity prices will grow significantly in future, is wishful thinking. Wholesale prices are unlikely to achieve the levels needed to justify construction of a nuclear power plant (EUR 100-120/MWh).

There are four potential drivers of power prices: demand, gas, hard coal and carbon. Of these, only carbon is relevant in our view. We have discussed demand. Even if demand were to increase in line with Czech expectations, this new demand could be met by Europe’s existing capacities, much of which are either off-line or run at part loads due to healthy supply of renewable power.

The capacity market will not have significant impact on gas demand and wholesale power prices, in our opinion. Wholesale prices may stay depressed as gas plants get part of their compensation from the capacity market. And demand for gas may not increase much given that these plants tend to run at part loads.

A third possible driver is the price of hard coal. Abundant supply of cheap hard coal into Europe will keep prices down. US demand for hard coal will stay low thanks to shale gas and coal previously exported to the US will come to Europe.

The fourth and the only realistic driver of future power prices is carbon. We assume that the stability reserve mechanism will eradicate oversupply of allowances. Once supply and demand for carbon are in equilibrium, prices should increase to levels close to EUR 40/tonne. At that price, coal-fired plants become more expensive than gas-fired.

In our bullish carbon scenario, wholesale power prices would increase to EUR 77/MWh in 2030. Carbon prices would not increase the wholesale power prices to levels needed to justify construction of new nuclear. Needless to say, failure to implement the stability reserve mechanism swiftly will push carbon prices to zero thanks to a surplus of allowances.

Jan Ondrich is a partner in market analysis and advisory firm Candole Partners.