The Energiewende is Germany’s poster child. No wonder, a guidebook which details nearly 200 renewable energy sites throughout Germany is selling well. Komila Nabiyeva reports from Berlin. 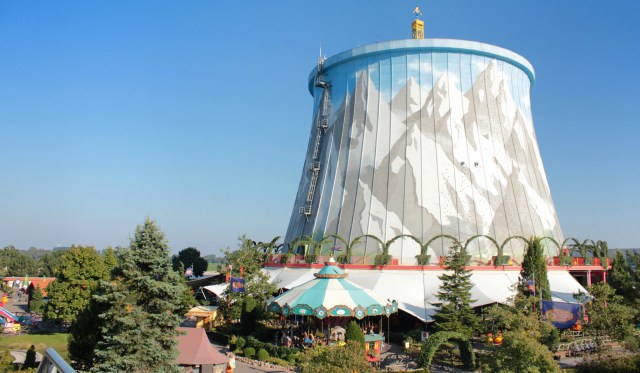 Germany is becoming a renewable energy wonderland – an old nuclear plant that never made it past its construction stage was turned into “Wunderland Kalkar”, an amusement park. (Photo by mhrs.jp, CC BY-NC 2.0)

Wind turbines and solar panels: do you love them or hate them? Do you think of renewable energy as the way to a greener future, or an awful blight on the present?

Either way, growing numbers of German communities think they have found a silver lining: they’re touting renewables as tourist attractions. A guidebook is now available, listing about 200 green projects around the country which it thinks are, in the travel writer’s time-hallowed phrase, “worth the detour”. The publication, which has already run to a second edition after the first sold out, was supported by  Germany’s Renewable Energies Agency.

Nuclear power stations are not top of every tourist’s must-see list. But the book’s author, Martin Frey, says a nuclear plant in Kalkar, a town on Germany’s border with the Netherlands, is the world’s safest. It pulls in more than half a million visitors annually.

Safe? It should be, because local protests – driven partly by the 1986 Chernobyl accident – meant it never started operation. Now it’s an amusement park offering hotels with all-inclusive holidays, restaurants and merry-go-rounds. Its most popular attraction is a gigantic cooling tower with a climbing wall outside and a carousel inside.

Blast from the past

Another strictly retired “attraction” listed is Ferropolis, the City of Iron. Located on the site of a former brown coal (lignite) opencast mine in the eastern German state of Saxony-Anhalt, it’s a bit of an oddity in Frey’s list – an open-air museum, preoccupied not with emerging technologies but with echoes of one that many hope has had its day.

Huge redundant metal structures, immense excavators and towering cranes, all abandoned, give Ferropolis the air of a post-apocalypse movie. But in a nod to the future the roof of a former workshop is covered with solar panels which help to power the museum’s annual summer music festivals.

Germany is moving rapidly away from the past which Ferropolis evokes in its switch to renewable energy. In the last decade renewable power generation has tripled and now provides a quarter of the country’s electricity and about 380,000 jobs. Wind, hydro, solar and biogas plants are taking over from coal and nuclear power.

The change is evident right at the heart of the nation’s political life. The glass dome of the Reichstag, a tourist magnet which stands resplendent on the Berlin skyline, contains a cone covered with 360 mirrored plates, which reflect sunlight and illumine the plenary hall below. And there’s more: a heat exchanger inside the cone’s ventilation shaft significantly reduces the building’s power consumption.

The Reichstag also boasts an array of solar panels, and half its electricity and most of its heat come from two combined heat and power generators beneath the building, which run on bio-diesel.

If you want to combine some mildly energetic activity with your environmental sightseeing, then head for Lower Saxony where you’ll find the Holtriem wind farm. The largest in Europe when it was built, with a total capacity of 90 MW, it has an observation platform on one of the turbines, 65 m above ground. That offers tourists – if they’re prepared to climb the 297 steps to the top – a stunning view of the North Sea and, in good weather, the East Frisian islands.

Also in Lower Saxony is Juehnde, the first German village to achieve full energy self-sufficiency. Its combined heat and power plant produces twice as much energy as Juehnde needs. The villagers are so keen to share their experience that they built a New Energy Centre to win over visitors.

Frey, a journalist specialising in renewable energy, says he wrote the book because he’d been impressed by a large number of innovative renewable projects and wanted to share them with tourists as well as experts.

Komila Nabiyeva reports on climate change, energy, and development issues. This article was first published on the Climate News Network and is reposted with the author’s permission.

Germany: Experience Renewable Energies, published by Baedeker, is available in German (and only in print) for €16.99. An English language version may be produced if there is enough demand.