There are increasingly reports that the Energiewende is hurting German industry. Yet, such concerns come at a time when the German economy has never looked better. Craig Morris explains.

German exports are at an all time high. (Photo by Martina Nolte, CC-BY-SA-3.0 de)

Daniel Yergin is the author of the Pulitzer Prize-winning book The Prize (hereby highly recommended). For the past few months, this oil sector insider has also become a critic of the Energiewende, specifically in terms of its impact on energy prices for industry. In a recent New York Times article, he is quoted as saying, “There has been a kind of waking up to the fact that the premises of the Energiewende, however well-intentioned they are, no longer hold because the world is changed.” The article also refers to a recent IHS study (Yergin is vice president of the IHS), which argues that “the country cannot meet its future needs solely through renewable sources.” The study thus argues that Germany cannot do what it is not attempting – the goal is 60 percent renewable energy by 2050, not 100 percent.

German competitiveness hard to improve upon

In February, Yergin told the Wall Street Journal that “Germany should scale back its plans for expensive renewables and complement the drive with more domestic natural gas production.” And from the World Economic Forum in Davos, he reported in January that Germany’s economic competitiveness was at stake, particularly in light of lower energy prices in the US. Strangely, he did not add that what the Forum itself found: Germany is the fourth most competitive country in the world, even ahead of the US. 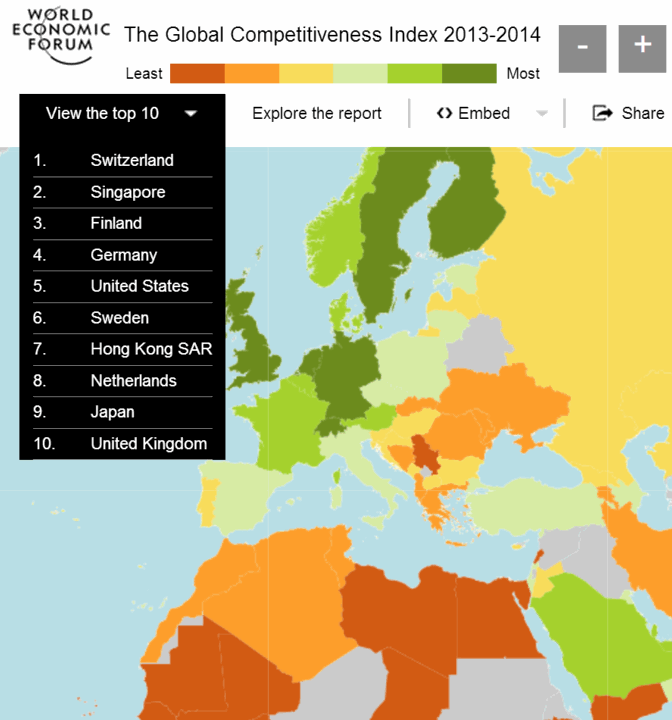 To be fair, Yergin also quoted German Industry Minister Sigmar Gabriel, who conjured up the threat of “dramatic deindustrialization.” But the concern makes little sense.

Let’s start off by recognizing that Germany actually still has a lot of industry to lose, though the Energiewende has been going on since at least 1991 or 2000, depending on which legislation you start with. In 2012, industry made up 19.1 percent of the US economy, 21 percent of the UK’s economy, and 28.1 percent of the German economy.

Next, let’s acknowledge that Germany’s neighbors would love for the Germans to be less competitive. The unemployment rate is at its lowest level since reunification more than two decades ago. Tax revenue hit a record high in 2013. Germany’s Finance Minister recently announced the first balanced budget since 1969. German businesses are doing so well that the country posted a record trade surplus last year. The surplus almost reached three percent of GDP, a record not only for Germany, but for any country anywhere throughout history. Yet, we read that US investors are worried about German energy policy.

There is no doubt that energy prices are higher in Germany than in the US. There is also no doubt that cheaper fossil fuel is not a goal of the Energiewende. Leaving more unburnable carbon where it belongs – in the ground – is. The Germans aim to transition to renewables, phasing out nuclear completely and fossil energy to a great extent – goals only achievable in combination with greatly reduced energy demand. Germany is also highly dependent on fossil fuel imports, and prices are rising.

Specifically, shale gas – one reason why energy prices are currently so low in the US – is politically not an option in Germany. Shale gas is booming in the US not because of some technical breakthrough, but because the Energy Bill of 2005 makes it nearly impossible to hold fracking firms liable for environmental damage. Last year, former German Environmental Minister Peter Altmaier (a Christian Democrat) said shale gas can go ahead anytime in Germany – as soon as a community is found that accepts it. In other words, he would not give corporations rights against the will of local communities affected. The new coalition under Christian Democrat Chancellor Merkel has not changed that position.

Here, we have the major confusion – Yergin is mainly talking about the price of gas, which is indeed relatively high in Germany. Look closer, and you’ll see that most discussions about “high energy costs” in Germany are indeed more closely linked to natural gas than electricity.

Retail electricity rates are up; Germany has the second-highest in the EU after Denmark. But industry doesn’t pay retail rates. The rates they pay differ greatly, however, depending upon which exemptions to surcharges are granted. Firms with the greatest power consumption – the ones with the most exemptions – paid as little as around 0.05 euros per kilowatt-hour in 2013. Energy-intensive industry in Germany is therefore paying prices close to those in New England – where, incidentally, power prices rose by more than 50 percent last year. In contrast, wholesale prices in Germany are falling.

Craig Morris (@PPchef) is the lead author of German Energy Transition. He directs Petite Planète and writes every workday for Renewables International. This piece previously appeared at GreenTech Media.