One common question from pro-nuclear Energiewende critics is what Germany would look like today if it had not switched off 40 percent of its nuclear capacity in 2011. In recent weeks, we have gotten a taste of the answer: massive voluntary shutdowns of coal and nuclear. Craig Morris investigates.

Eon’s Gas Power Plant in Irsching, part of reserve capacity in Germany. Originally praised as one of the most advanced facilities in the world, the plant hardly runs any longer and is unprofitable. (Source : Dominik Zehatschek/E.ON)

The next nuclear plant to be shut down in Germany is Grafenrheinfeld, scheduled to be switched off for good at the end of 2015. But on Friday, German daily Süddeutsche Zeitung reported that German energy giant Eon aims to shut down its nuclear plant as early as the spring 2015.

First, the firm would have to petition Germany’s Network Agency for permission; the grid regulator then decides whether the plant in question can be switched off without endangering grid stability, particularly in its area.

Apparently, opinions differ about whether the plant is needed. The local grid operator “vehemently denies” (the wording in the press report) that there have been recent “close calls,” and the paper also says that the Network Agency recently did not believe the plant was required for grid stability. The plant’s location is the site of a major north-south transmission grid line, whose necessity is controversial.

The plant would need to be refueled next spring so that it can run until the end of the year, and Eon apparently wants to save itself the trouble. Wholesale prices are now regularly down below the 0.04 euros per kilowatt-hour that RWE’s CEO recently said was necessary for baseload power plants to turn a profit.

The Bavarian government disagrees that the plant is not needed for stability. The firm may ask the government for 80 million euros in return for roughly 8 additional months of power production.

As I recently reported, coal plants in particular are being squeezed out – nuclear less so, an indication of their relative inability to ramp up and down.  This month, RWE also announced plans to close a nearby gas turbine because of “all the solar power being generated.” The area, Emsland, apparently produces more solar and wind than the region consumes overall, though backup capacity is obviously also needed.

In nearby Lünen, Europe’s most efficient coal plant was taken off-line completely for the weekend of March 15-16 in anticipation of strong winds. (Ironically, the brand-new unit fired with hard coal at an efficiency of 46 percent is located close to the world’s first Passive House indoor swimming pool.) Here is the chart from Fraunhofer ISE showing wind production that weekend. 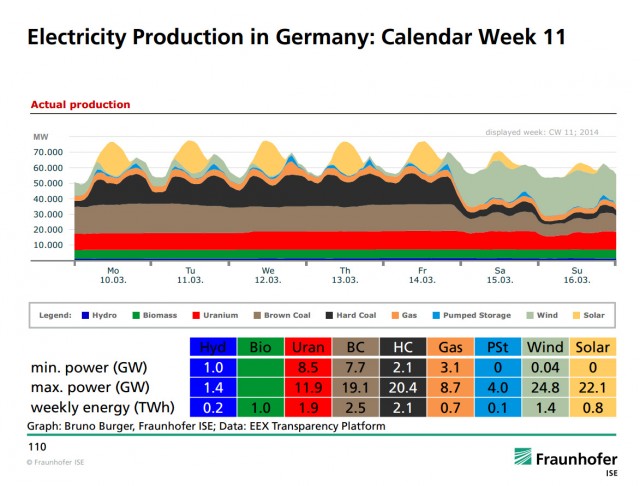 Clearly, wind and solar power are dramatically cutting into demand for conventional power, making such plants increasingly unprofitable. Yet, as the chart also shows, the need for backup capacity remains largely unchanged.

So what would the German power sector look like if those eight nuclear plants had not been shut down in 2011? Add 40 percent to the red bar in the chart above, and you get an idea. As recent events show, the result would have been massive voluntary shutdowns of baseload plants. It remains unclear, however, whether the focus would have been more on coal or nuclear. Certainly, the biggest loser would have been the current one: natural gas.