In his last post of 2013, Craig Morris addresses his readers who have accused him of “cherry picking” over the year. He says the fruit from the top tastes the best. We just hope he doesn’t hurt himself up there – and that you don’t either when you’re putting the last decoration atop your Christmas tree. Best wishes for 2014 from all of us at EnergyTransition.de!

Some of our most popular graphics have also been the most controversial, generally because our critics cannot believe a website run by the German Greens could be saying what the chart actually shows. I should point out that I am neither German nor a member of any party, and I write what I want here; I receive feedback, but no censorship. I was asked to write our e-book in 2012 (PDF) and the blog this year because I was pointing out the Energiewende’s shortcoming years ago – after all, I want it to work.

But first, take a look at three of the charts that our critics can’t believe they correctly interpret. 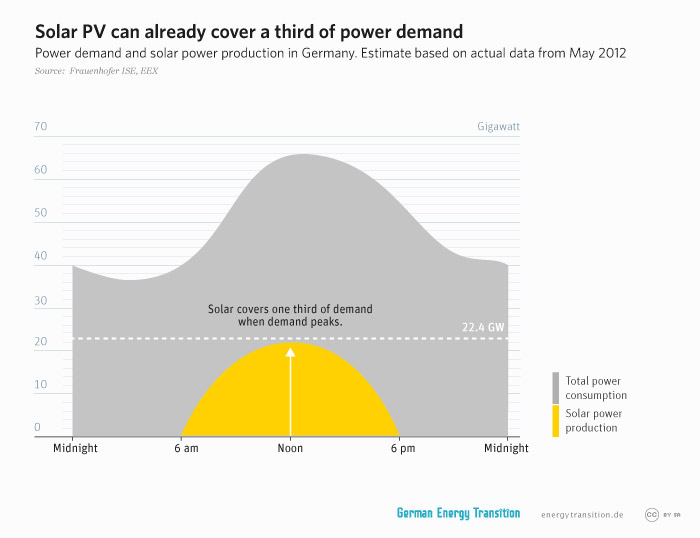 This chart is allegedly cherry-picking because we took a day in May close to the summer solstice. Had we taken a day in the winter, they charge, the impact of solar would be much less. That’s true, but our chart shows not only that solar can cover up to a third of peak power demand already, but that it covers zero percent half the time.

The data from May 2012 were popular in Germany, not because German researchers (the chart above is based on an analysis by Fraunhofer, and the one below is by German renewables professor Volker Quaschning) wish to overstate some minor achievement, but because these peaks are going to be disruptive soon. 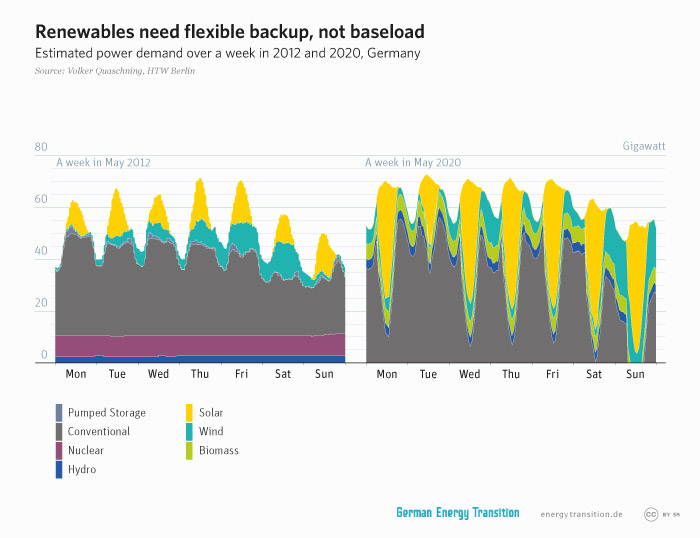 Here, we see that solar will be wreaking havoc on baseload power by the end of this decade. Conventional plants cannot ramp up and down like this, and they are built for decades. The fast growth of solar in particular means that you either have to slow down the installation of new solar or trash your entire legacy fleet of nuclear and coal, replacing it all with gas turbines (don’t hold your breath). It remains to be seen how all of this will play out; we merely point out what is happening.

Finally, there is this chart: 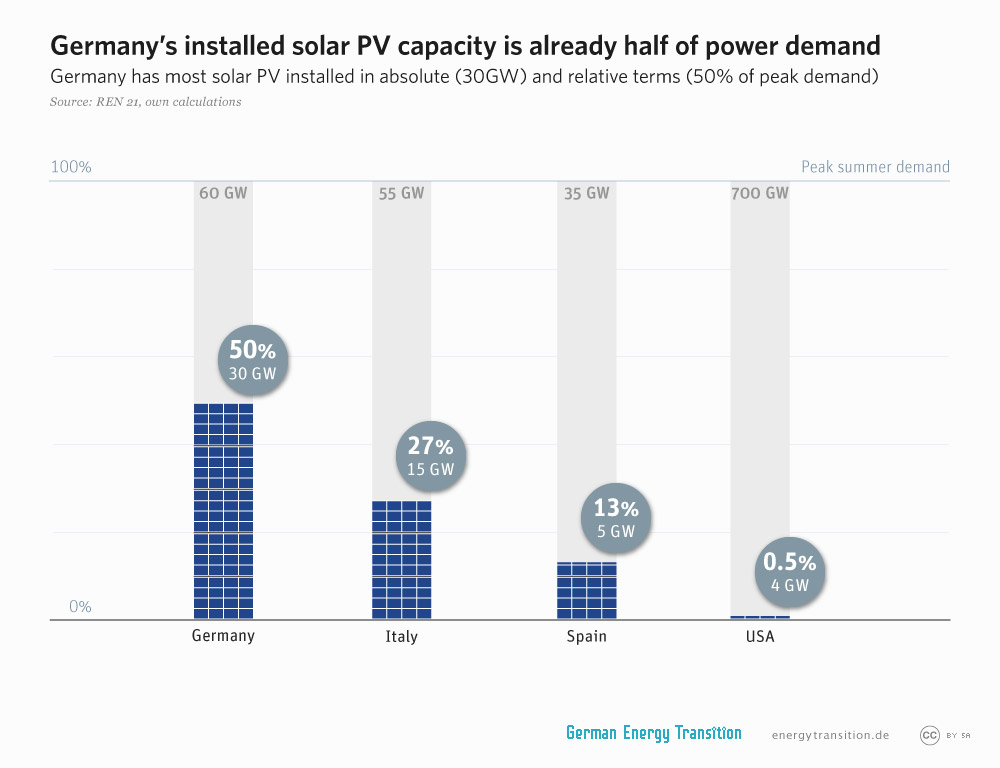 Various critics have repeatedly claimed that it overstates the success of solar in Germany. Some readers cannot believe that a website by the German Greens would wish to point out that solar cannot make up a large share of German power supply without storage (which will be expensive), but since 2010 I have been ringing this bell as loudly as I can – and it is one main reason why I was asked to write this website.

In April 2013, I wrote, “Germany will always need more than 80 gigawatts of dispatchable capacity on those November evenings when the sun never shines and power demand always peaks.” Way back in 2010, I launched the website Renewables International with a six-part series on how grid parity does not matter for solar, but “peak demand parity” will (for the record, I was right). Here are some of the statements I made back then:

In April 2012 (just weeks before I began working for German Greens), I wrote about the first instance of wind + solar peaking at more than 50 percent of demand – and the impact on power prices. My report is not exactly celebratory: “it is something that Renewables International has been warning about since its inception a year and a half ago.” This skeptical reporting about solar led the Heinrich Böll Foundation, which runs this website, to hire me, and the third chart above is the graphical rendition of my neologism of “peak demand parity,” which has not gained traction, so I now call it the “winter gap.”

Pointing out – as I did here in German in January 2011 – that 8 GW of PV was only enough to provide one percent of German power, so “even 10 percent solar power will be a challenge” (“Selbst 10% Solarstrom wäre eine Herausforderung”) is no way to make friends in the solar community; the commenters under that article outright thrash me.

Three years later, no one would doubt that I was right. But I don’t expect the solar community to applaud. I’m concerned about the energy transition, not just solar.

The Heinrich Böll Foundation deserves some respect for promoting someone who maintains a critical perspective on PV. Next year, when I am inevitably accused once again of cherry-picking, I’ll at least have this article to link to. Such critics obviously aren’t reading the text around the charts, because we very clearly state in our e-book right before the first chart above:

“All of this [PV growth] has come about so quickly that politicians are now looking for ways to redesign the German power market to ensure that enough generating capacity remains online and dispatchable for those hours in the winter when Germany reaches its absolute peak power demand for the year (around 80 gigawatts), which also happens to be a time when no solar power at all is available.”