Since a few years, self-consuming solar systems are on the rise. Jesse Morris, a senior associate of Rocky Mountain Institute, takes Germany as an example and looks at the possible implications for the U.S.

Solar Self-Consumption is on the rise in Germany. (Photo by FuFuWolf, CC BY 2.0)

Clean energy advocates are almost universally guilty of a certain level of reverence for Germany—myself included. Often heard are declarations such as, “Of course we can transition to renewable energy in the U.S.—just look at the Germans!” or “Did you know solar energy costs half as much in Germany as it does in the U.S.?”

Well, I’m going to talk about Germany again, but this time the tagline is quite different: Germany is only expected to install 3.9 gigawatts of solar in 2013, down from 7.5 last year. That means we Americans might finally install more solar in a single year than the Germans.

This decrease is largely attributable to a fundamental shift in the value proposition of solar in Germany. Understanding this dynamic is important, as it provides perspective on perhaps the most contentious renewable energy topic in the U.S. today: net energy metering (NEM). Grist writer David Roberts’ explains the issue simply: net metering is a policy in place in just over 40 states where electric utilities provide credit to customers with solar PV systems for the full retail value of the electricity. If customers produce as much electricity as they consume, their bills “net out” to zero (or to the minimum monthly customer charges, where these apply). That means the customers aren’t paying for electricity, but it also means that they aren’t paying anything towards their utility’s fixed costs (such as existing generating assets that produce electricity when the sun isn’t shining, distribution lines, etc.). As more customers zero out or dramatically reduce their bills with net energy metering, these fixed costs are covered by fewer customers, raising rates. To most utilities, this doesn’t make much sense since solar customers still rely on the grid for much of their electricity demand.

The German Solar Market: FiT For a Change

To understand the connection between net energy metering and what’s going on right now in Germany, a little bit of history helps. In 2000, the German government launched a massive ratepayer-subsidized campaign to expand solar energy deployment—the solar feed-in tariff (FiT) program. FiTs subsidize generation from renewable energy technologies, making them affordable in the near term and enabling industry-wide growth. Since solar equipment costs were very high relative to retail electricity prices as recently as three years ago, the Germans set FiT levels well above the retail price of electricity in order for solar systems to make economic sense. This led to a flood of new investment, an unprecedented multi-year explosion in solar installations, and by consequence, large-scale reductions in PV equipment costs.

FiTs are designed to help governments meet certain capacity targets. So (like most subsidies) they slowly phase out over time by offering a lower price per kilowatt-hour (kWh) as different targets are met, resulting in a step down of FiT levels year after year. This brings us to where we are today in Germany, with the FiT for typical residential systems set at $0.20/kWh, two and a half times lower than it was in 2010.

Unlike the situation stateside where customers are credited for their solar-generated electricity at the full retail electricity rate under net energy metering, most German systems are only credited at the current FiT rate ($0.20/kWh). German residents, on the other hand, pay on average $0.36/kWh for electricity in their homes. This discrepancy is the primary reason the German solar market is in transition. 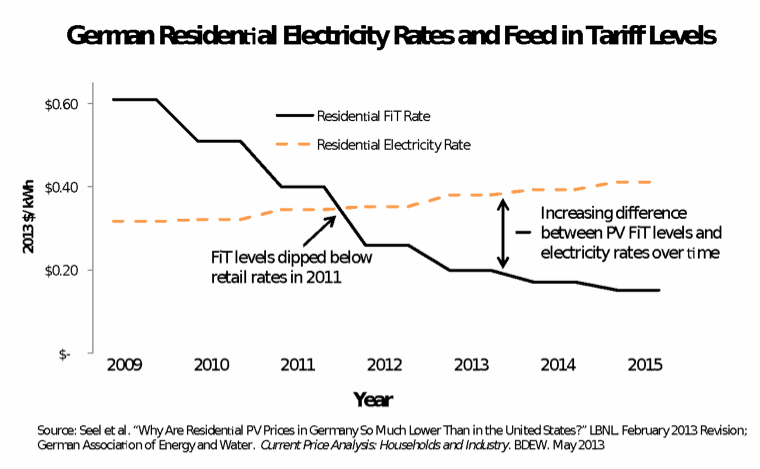 Solar developers in Germany are now looking at new models that focus on the high retail rates paid by customers as illustrated in the chart above.

Enter a concept that’s been floating around the solar space for some time but has yet to break into U.S. vernacular: self-consumption. The concept is simple: instead of feeding all of your system’s solar energy production back onto the grid and being credited for each kWh at the FiT level, as has been done in Germany for years, an installer configures a PV system using an additional meter so that each kWh produced by your PV system gets special treatment depending on where it’s used:

A simple example helps illustrate the economic case behind self-consumption in places like Germany and Australia, where FiT levels are far below the retail electricity rate. Let’s take a German home that uses about 250 kWh each month and equip it with a PV system that’s able to produce roughly the same amount of energy on a monthly basis. If electricity from the system were only being compensated at current FiT rates, the homeowner would be making about $50 a month from the solar system. Now lets take that same system, but configure it to enable self-consumption. In Germany, homes can typically use about one-third of the energy produced by a solar system on site. Now the model changes: about 83 kWh are credited every month at the retail rate (the “self consumed” amount) while the remaining solar generation is credited at the FiT level since it’s not used on site. This leads to 26 percent more money in the homeowner’s pocket compared to the pure FiT system—$63 a month.

But simply making the switch from FiT to self-consumption is only a small part of the financial equation. With self-consumption, building owners/tenants are incentivized to use as much solar electricity on site as possible. This means doing things like installing east/west-facing systems that better match the load, purchasing home energy management systems that time appliance use to coincide with solar production, and, at the far end of the spectrum, installing battery storage systems. These technologies allow German customers to go from using one-third of their solar electricity on site to up to 75 percent.

Self-consumption leads to some interesting system-level benefits as well:

Self-Consumption in the U.S.

The German situation—where retail electricity rates are increasingly higher than what’s usually paid for solar energy—could be just around the corner in the United States. That’s because net energy metering is increasingly under the magnifying glass of utilities and regulators. Many U.S. utilities have proposed solar-specific tariffs where customers continue to pay retail power rates but are credited for solar generation at a separate solar-specific rate. This value of solar rate is based on how much value solar actually provides to the grid, thereby providing fair compensation to both the customer and the utility.

As someone who’s been closely following the NEM debate here in the U.S, I’m very interested in self-consumption’s potential to ameliorate many of the issues associated with NEM. Imagine the benefits in a utility territory where a U.S. customer installs a self-consuming solar system:

Self-consumption won’t manifest here overnight for two main reasons. One, there’s a massive absolute cost difference: the average residential electricity rate in the U.S. is just under one-third of Germany’s at $0.13/kWh, so the impact of offsetting retail rates instead of using a specialized tariff aren’t as drastic in the U.S. Second, utilities (or perhaps public utility commissions) would have to give the thumbs-up on self-consumption by clearly delineating their billing structure and agreeing to some kind of value of solar rate.

But these limitations can be overcome, probably before 2020. If PV system costs are able to hit the Department of Energy’s SunShot targets, solar will have a compelling value proposition in spite of our “low” electricity rates. Furthermore, utilities are actively engaged in the search for solutions to the net energy metering/value of solar challenge as we speak—just look at Minnesota’s search for a statewide solution as an indicator of how metering rules and rate designs can be changed in a relatively short amount of time.

As U.S. utilities and solar advocates search for the next step beyond net energy metering, we should learn from our European counterparts who are dealing with these issues now. Finding system configurations and rate structures that are fair to all stakeholders, including the non-participating solar customer and the utility, are few and far between. And while self-consumption is not a panacea, its potential benefits to multiple stakeholder groups make it worthy of further consideration, especially as the net energy metering issue comes front and center for more and more utilities across the country.

This article was written by Jesse Morris, Senior Associate for electricity and transportation practices at Rocky Mountain Institute, and first published at RMI Outlet.