In mid-August, Germany had its first normal workday on which peak power prices were below base prices, and futures prices are also down. Craig Morris provides an overview and warns proponents of renewables not to rejoice too soon at the demise of conventional power.

Dirty, inflexible, obsolete: Niederaußem Lignite Power Plant in North Rhine-Westphalia and according to the WWF one of the most inefficient power plants in Europe. (Photo by Stodtmeister, CC BY 3.0)

On August 21, the price of power derivatives for Phelix (the power trading zone for Germany and Austria) was below four cents per kilowatt-hour for September 2013, Q4 2013, and 2014; for next year, power is already trading at only 3.648 cents per kilowatt-hour (see chart below). The four-cent threshold has become a buzzword since German energy giant RWE’s CEO famously said no profitability is possible below that price. Going forwards, conventional power producers in Germany therefore face bankruptcy – but we will come back to that topic later. Today, let’s stick to the numbers. 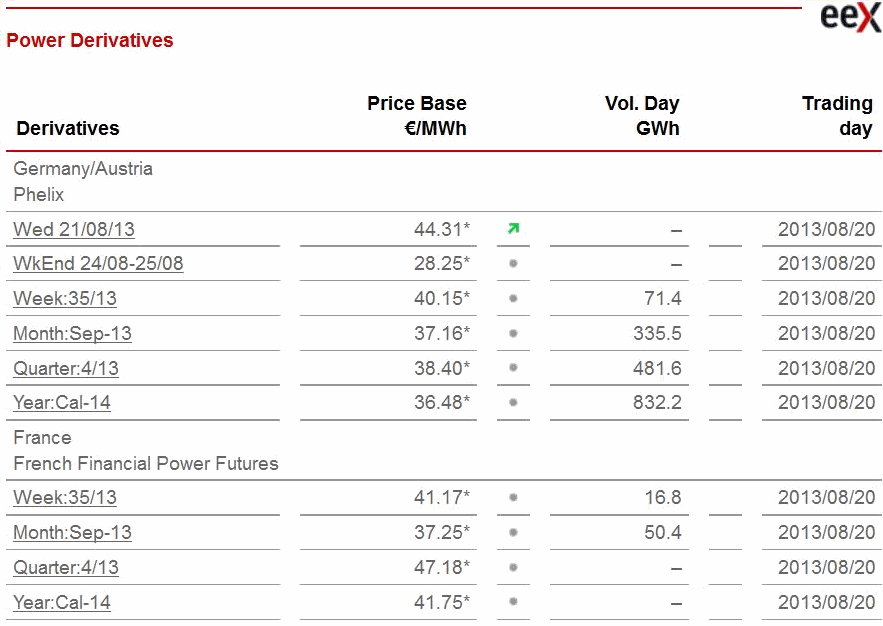 On sunny weekends, it has not been uncommon for power prices at times of peak demand to be lower than baseload power prices (times of low demand). The situation marks a reversal of what’s expected; usually, baseload power is the cheapest, and peak power the most expensive. But on weekends, overall peaks are lower as many businesses are closed, so when a lot of solar power is generated, demand for conventional power is pushed back down to baseload levels even at times of peak demand. Rather than ramp down even further, power firms reduce their prices to encourage demand – and, in Germany, that mainly means power exports. 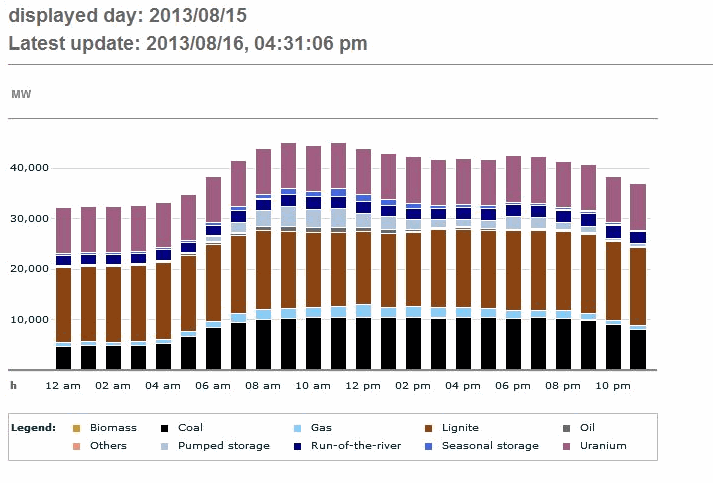 On Thursday, August 15, conventional power (fossil, nuclear, and hydro) was kept down in the lower 40s (gigawatts – see chart) as wind and solar peaked at around 20 GW – not an especially high level. Indeed, as our friends over at Clean Technica recently reported, the record for solar power alone in Germany is higher. So on a normal workday, with peak demand approaching 70 GW, peak power cost less than baseload power on the exchange.

It may be the first time this has happened, but it probably won’t be the last. This month, researchers at Fraunhofer ISE published a study (PDF in German) with the following key findings:

The result is considerably greater power exports, much of it obviously electricity from brown coal and nuclear plants – but we will have to come back to that as well.

And then there is the question of how conventional power providers will survive. Proponents of renewables might not like to admit it, but we will need these plants during the transition; the companies cannot go bankrupt, and the plants cannot all be mothballed. Some interesting proposals are on the table for a market redesign, and we have discussed capacity payments here several times already. Perhaps the most important takeaway now for international readers is that Germany’s energy transition is a major threat to the profitability of conventional power, which is staying afloat at present primarily by exporting power on the cheap.