Could the German Energiewende be a blueprint for the United States? Jonathan Thompson recommends to learn from the German experience and realize that the transition makes sense not only environmentally, but also economically.

Strong winds, weak policies: A windfarm in Idaho.  (Photo by the US Government)

Peter Stehr is an apple farmer. But when he had a heart attack in 2002, he decided he needed to diversify his income, so he and some associates got a loan and put up a few .6 megawatt wind turbines in his orchard. Today, one of them still spins over a row of apple trees, kicking out some 1 million kilowatt hours of electricity each year, which he sells to the grid for about $120,000.

Plenty of Western ranchers and farmers could use that sort of cash, especially in these days of extended drought, when the ditches run dry after the first cutting of hay. But Stehr lives in Germany, outside Hamburg, and his wind-powered windfall is the offspring of that nation’s Energiewende — inadequately translated as “energy transition” — that encourages renewable energy and is phasing out nuclear power. 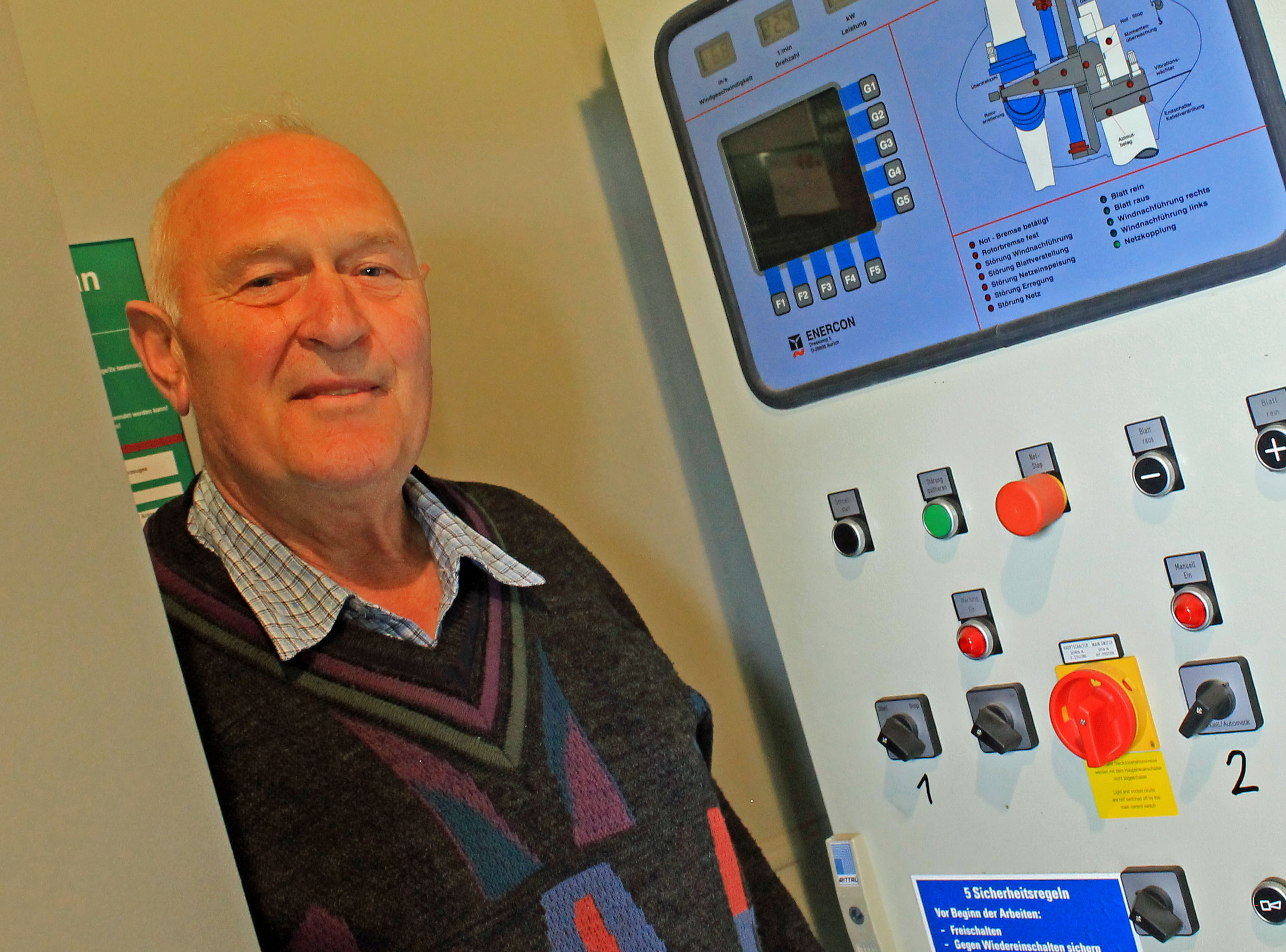 Peter Stehr, an apple and wind farmer, next to his turbine’s control panel. He makes a tidy sum from the power he generates. (Photo by Jonathan Thompson)

I and 17 other European and American journalists visited Stehr in June as part of a weeklong Energiewende immersion tour spearheaded by the Transatlantic Media Network. My mission was to try to answer the question I asked in this space a few months back: Can the West have its own Energiewende? Now, after delving into the details of Germany’s plan, and listening to all of the challenges, which are not unlike ours, I’ve got an answer: Yes.

From the many glowing reports on the Energiewende from journalists on this side of the Atlantic (including, I confess, my own), we might be led to believe that Germany’s progress on renewable energy is out of our reach: They’re simply greener than us, more inclined toward allowing government interference, with a political will to combat climate change that we lack. We drive Hummers; they prefer tiny Twingos. We love energy-gulping air conditioning; they don’t even use fans. We have the Tea Party; they have the Green Party.

There’s some truth to this. But as one of our hosts emphasized, “Germany is not a renewables Disneyland.” What he meant was that as successful as their energy transition has been — on one day in June, solar and wind accounted for 60 percent of Germany’s power production — it hasn’t come without pain, conflict or, for that matter, a healthy dose of coal.

Germany’s Energiewende has two parts. One is the phaseout of nuclear power, which has been in the works for some time, but was accelerated in 2011. The second is the move toward renewables, driven primarily by the feed-in tariff (FIT), which guarantees renewable power producers a premium price for their goods for 20 years, along with automatic access to and priority in the grid. The FIT turns everyone from the apple farmer with a turbine to the apartment-dweller with a solar panel into his own mini power company with a long-term, potentially lucrative contract with the utilities. To fund the tariff, a renewable surcharge is tacked onto power customers’ bills. Now, Germany has 30 gigawatts of installed solar — about five times what the entire U.S. has — a good portion of which is individually owned. The FIT is almost wholly responsible for that. Although a Fox news commentator once attributed Germany’s solar success to the fact that it gets more sunshine than the U.S., it actually has the solar potential of Alaska, as can be seen in this map. (Source: National Renewable Energy Laboratory)

Before you scoff at the potential for such a program in the U.S., consider this: Just days ago Los Angeles implemented its own feed-in tariff (though limited in scope). And deep red Arizona has long had a robust net metering system in place, which is similar to a feed-in tariff. Meanwhile, the federal production tax credit has helped the U.S. install a whopping 60 gigawatts of wind capacity. Clearly, we in the West are open to such programs, as long as they don’t raise our electricity rates too much.

Well, guess what? Germans feel the same way. Individuals, cooperatives and companies receiving the FIT, like those on net metering in Arizona, don’t pay infrastructure fees for using the grid, transferring that cost — critics say unfairly — to the ratepayers. The debate sounds remarkably similar to the one going on in Arizona right now. So some German politicians are working to change the pricing structure on the tariffs or even eliminate them altogether. That’s despite the fact that the FIT is really not the main driver of energy prices. Corporate welfare is: In order to keep large industry — which is thriving in Germany — from fleeing, the biggest energy users don’t have to pay the renewable surcharge, pushing that cost onto individual customers. And the pricing scheme is such that when wholesale power prices drop due to so much renewable power going into the grid, the ratepayers actually pay higher retail prices (meaning the utilities reap higher and higher profits). These are mistakes from which we in the West can learn.

Germany’s grid, too, faces many of the same problems as ours: It was built around a centralized fossil fuel and nuclear system, and needs more “flexibility” in order to efficiently back up all that wind and solar. Natural gas plants that would provide that backup are being mothballed because they are economically infeasible (since they only run a few hours each month). Transmission lines are needed to link offshore wind turbines in the north with industrial centers in the south and west, just as we need new transmission to get wind power from Wyoming to California. Yet just as is the case here, grid expansion in Germany — along with big wind farms — runs into local opposition over aesthetic and environmental concerns.

Perhaps most worrisome is that even as Germany beefs up its renewable portfolio, it’s also burning more coal. Last year, 45 percent of its electricity was from coal, slightly higher than here. This is not solely, as some believe, the result of shutting down nuclear plants. It’s because coal — especially lignite or brown coal — is dirt cheap in Germany. Lignite is mined royalty-free and has a strong lobby pushing it. Meanwhile, natural gas prices in Europe are rocketing upward. Naturally, utilities are turning to the cheaper fuel and away from natural gas.

All of which is to say that in the end, Germany’s path to a carbon free future is filled with as many cultural, political and economical obstacles as ours. Yet they are overcoming many of those obstacles, thanks in part to what I think of as American traits: innovation, locally-owned energy, and seizing opportunities to make money in areas like energy efficiency. That means that we should be able to accomplish all that they have and then some, thanks to our abundant resources. The West has more potential for wind power than Germany, and far, far more solar resources (Germany is basically on par with Alaska when it comes to generating power from the sun). Just imagine how much electricity the Southwest could generate with 30 GW of solar capacity. We have more rooftops on which to put solar panels, along with plenty of vacant land. And we’re in the midst of a shale gas boom, which allows us to discard all that coal for slightly cleaner-burning natural gas.

What we have in resources, though, we’re lacking in a coherent and focused energy policy, one that sets tangible goals and provides the tools to reach them. It so happens that just as I was heading over to Germany for the energy tour, the Western Governors Association released its 10 year “Energy Vision” for this region. It’s yet another “all of the above” energy plan, encouraging renewables along with everything else, including oil, coal and especially natural gas. To its credit, it gives a passing nod to net metering as a useful tool along with the production tax credit, but misses out on one of the most important aspects of Germany’s incentives: long-term certainty and grid access. Even the most generous incentive is worthless if it will disappear next year, or if you can’t ship your power to market.

Just ask Peter Stehr, the fruit and wind farmer. As he filled us up with cider, he assured us that he’s no environmentalist — he built the wind turbines solely for the 20 years of assured income. Then he bid us aufwiedersehen and we headed down the road, only to pass a giant coal-fired power plant so new it hasn’t even started operating yet. It was a reminder of how tough a row we have to hoe in shifting away from our carbon-intensive energy system, both at home and abroad.

Jonathan Thompson (@jonnypeace) is a senior editor at High Country News, where this article was first published.