If the Energiewende is to succeed, the electricity grid needs to adapt to the flexible load and necessary transmission of renewables. David Roberts gives an overview about the challenges, policies and future of the grid in Germany.

Germany’s grid needs to adapt to renewables – which includes the extension of existing AC grids as well as the construction of new HVDC lines. (Source: energiedebatte.ch, CC BY 2.0)

Renewable energy sources, at least wind and solar, are variable — the wind isn’t always blowing, the sun isn’t always shining. This is something every glib pundit on the internet cites as a reason we’ll need fossil-fuel or nuclear “baseload” power plants for the foreseeable future. It’s a frustrating topic, since people who actually study the subject (like NREL) have shown that there are all sorts of ways to handle variability without disrupting the grid.

One of those ways is transmission: building power lines to take renewable energy from where it is abundant (often remote areas) to where it is needed (mainly big cities). More specifically, the idea is to build high-voltage direct-current (HVDC) lines that would carry energy over long distances from remote sites and feed it into the alternating-current (AC) lines that serve urban areas. (The DC vs. AC question is interesting, but not particularly essential for understanding the bigger questions.)

Transmission is a somewhat vexed subject in the energy world. It brings land/wildlife-focused enviros and local-energy enthusiasts in tension with mainstream enviros and lots of large corporate interests. I’m a local-energy guy myself and have, in the past, pushed back against the kneejerk resort to more transmission.

Here’s my logic. There are lots of ways other than transmission to handle variable renewable energy and help stabilize its presence on the grid: energy storage, sophisticated distribution grids, demand response, more energy efficiency, etc. Eventually (hopefully?), those other means will allow local, variable, renewable sources of energy to provide smoother, more constant service. And they’ll ensure that every bit of renewable capacity is used to the fullest. But it looks to me like renewables are scaling up much more quickly than those complementary technologies. Until we have more robust local energy systems, I think we’re going to need the brute-force method, i.e., transmission. (I’m open to hearing arguments to the contrary.)

Anyway, this is all by way of introducing some exciting developments in Germany. As a pioneer in scaling up renewables, Germany is currently facing all the challenges and roadbumps that other countries will face in the near future. One of those is the need for transmission.

Right now, the south of Germany — the heavily industrialized part — is struggling a bit. It receives lots of its energy from those big nuclear plants that are in the process of getting shut down. Meanwhile, northern Germany has more wind than it knows what to do with. Wind turbines in the north often stop running because there’s nowhere to send the power:

In 2010, German wind farms let some 127 gigawatt-hours of energy, enough to supply more than 30 000 German households for a year, fly on by. There was no grid capacity to deliver that power.

At other times, there’s so much northern German wind that the surplus power flows into neighboring countries’ AC grids, which aren’t always prepared to accept it:

The Czech Republic is installing phase-shifting transformers at its border with Germany, for example, to keep its neighbor’s renewable energy from looping through the Czech grid, which is at its carrying limit.

One obvious solution to this problem is to build more transmission capacity to carry northern wind power to the south. And this week, the German parliament approved a plan to do just that. (The Germans’ propensity for solving problems rather than whining about them, passing legislation rather than wringing hands, will be somewhat mysterious to young Americans.)

IEEE Spectrum did a really fantastic deep dive into the technology and logistics at work. As it notes, the need for new transmission is pressing:

In 2010, the [German Energy Agency] found that the country would need an additional 3600 km of new AC lines by 2020 to handle the growth in wind and solar power. That’s a daunting number given that stiff local opposition has stymied construction of all but 214 of the 850 km called for in 2005.

The $10 billion plan just approved by parliament will involve three high-voltage direct-current (HVDC) lines running north to south, through Corridors A, C, and D respectively. (I don’t know what happened to poor Corridor B.) Here’s their nifty illustration: 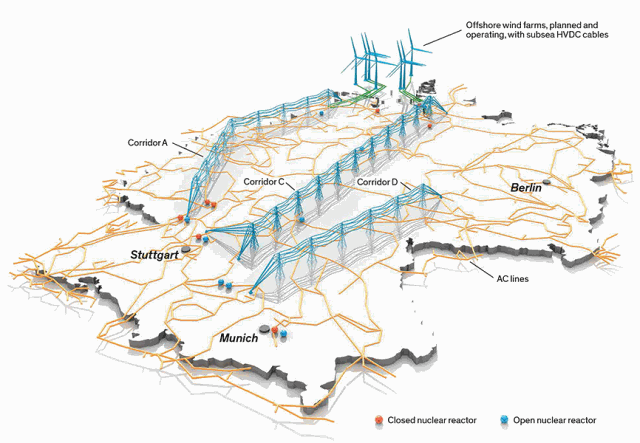 Like much else in the clean-energy world, HVDC lines have been the target of considerable innovation recently. It’s now possible to route them through existing AC corridors, using existing towers, thus minimizing the need for disruptive siting battles. Work is underway on high-tech converters that can also act as breakers, allowing power to be cut off in an instant in the case of fault or accident on the AC grid — at least in that sense, HVDC lines are getting “smarter” than existing AC lines.

In approving these lines, Germany is taking the first step toward a much-discussed “supergrid” that will interconnect all of Europe:

If Germany moves forward with such HVDC lines, it could help pave the way for something much bigger, a “supergrid” of inter connected DC lines capable of transporting electricity on a continental scale, ferrying energy from North Sea turbines, dams in Scandinavia, or Mediterranean solar farms to wherever demand is greatest at that moment. The European Commission is counting on this sort of flexibility to meet its goal of an 80 percent renewable power supply by 2050. Corridor A could be the first step.

The New York Times has more on the European supergrid idea; see also Friends of the Supergrid.

And then there’s Desertec, the proposed intercontinental supergrid that would connect renewable sources from North Africa to Europe: 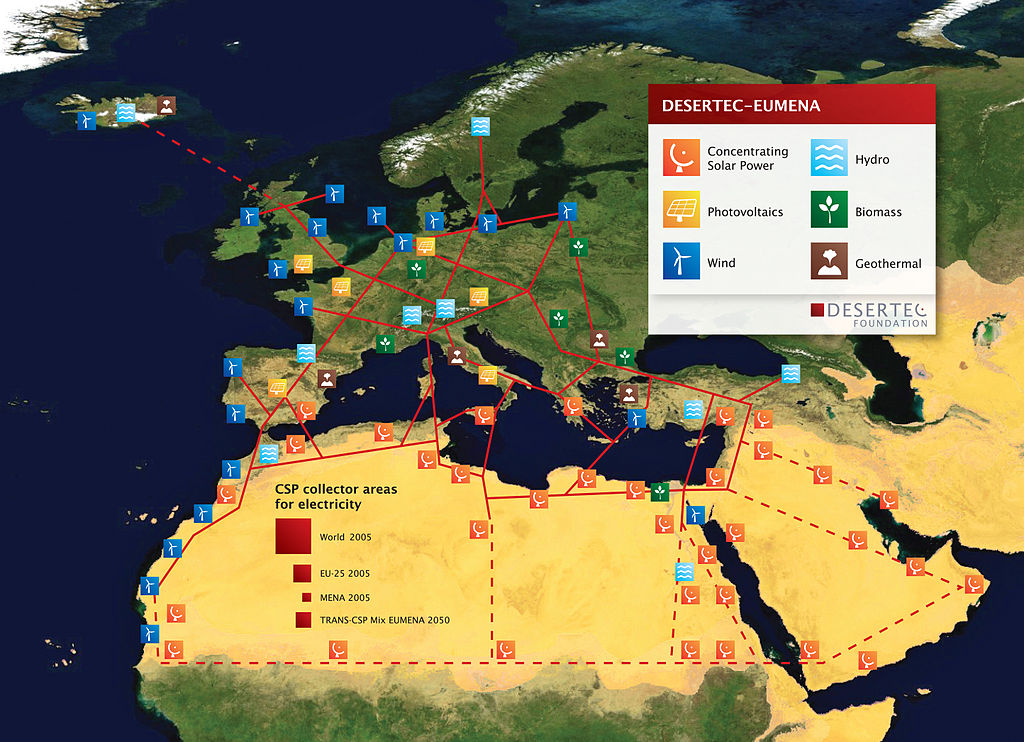 I’ve yet to hear much talk of a North American supergrid — presumably much of Mexico would be good for solar, though, and there’s all that hydro in Canada — but there are plenty of folks who’d like to see more HVDC transmission in the U.S. This is the U.S. transmission supergrid that the American Wind Energy Association has proposed: 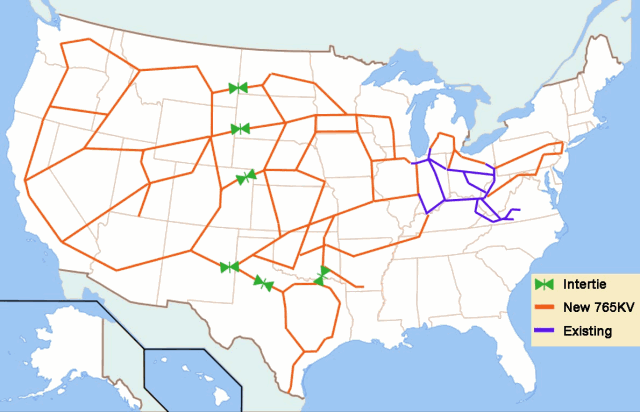 This is the kind of transmission flow that NREL envisions in its seminal Renewable Electricity Futures Study, which modeled 80 percent renewable electricity by 2050 (the blue dots are energy exporters, the red are energy importers):

For all kinds of reasons — the huge level of funding needed, the lack of federal regulatory authority over the grid, hyperpartisan politics — a supergrid is going to be tough to pull off in the U.S. We don’t really do big things any more. Or smart things. Or … things, really.

But if you want to imagine big, really big, head on over to the Global Energy Network Institute, which advocates “linking renewable energy resources around the world using international electricity transmission.” That’s a fun (and slightly psychedelic) thing to imagine: a networked global electricity system in which energy harvested anywhere on earth is available everywhere on earth. It would be like Gaia getting a nervous system.

Maybe someday. But for now, Germany is taking a small step.

David Roberts (@drgrist) is a journalist writing for Grist.org, where this post was first published.