The figures for ownership of renewables in Germany indicate a shift from private citizens, who still make up about half of investments, to the commercial sector. Craig Morris says some people saw this coming.

In my last post, I compared ownership statistics from 2011 and 2012 for renewables in Germany. One of the major energy policy changes in 2012 was the expiration of feed-in tariffs for new solar arrays larger than 10 megawatts. To give you an idea of how big that is, the average homeowner probably has space for 3 to 5 kilowatts – 10 megawatts is 10,000 kilowatts. 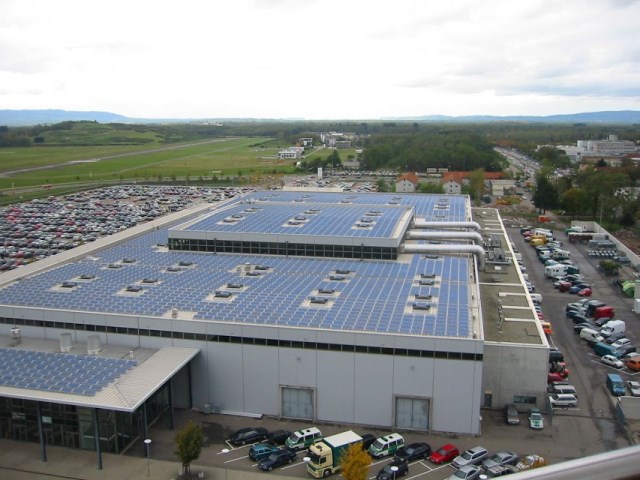 The tradeshow halls in Freiburg are covered with photovoltaics, but the system still only has a capacity of 245 kilowatts. (Photo by Craig Morris)

There was therefore a rush in 2012 to finish up the last systems larger than 10 megawatts, which may account for the two percent uptick in ownership among funds & banks, a likely group to own such systems. But the largest shift – five percent – went from private citizens to the commercial sector. Here, the German policy of “own consumption” (Eigenverbrauch) is probably at work.

The problem for most homeowners is that solar roofs produce most of their power in the afternoon, when most people are at work, not at home. A lot of power therefore has to be stored, and bigger battery packs make the approach less profitable. But the situation is fundamentally different for businesses, which generally have quite a large roof area and consume power during business hours. As I wrote back in 2010, this policy was thus bound to be popular among businesses.

Your average mom-and-pop shop that pays retail rates (around 27 cents) can thus benefit greatly from a solar roof, with feed-in tariffs for new systems installed in June dropping to 15 cents. But even midsize and large industry – which pays wholesale, not retail rates – is discovering the benefits of direct consumption, even of wind power. Last year, BMW put up four wind turbines at one of its plants in Germany. You see, it’s not just a question of the price of a kilowatt-hour, but also of maximum load. Power companies may charge extra if a firm consumes more than a certain amount at any time. Renewables can help keep the maximum load from the grid down.

This trend will continue. Indeed, it is hard to see how it could be stopped. And because commercial roofs are so much bigger than residential ones, the commercial sector may continue to take up a larger piece of the pie.

Likewise, the losers are also clear to see: the Big Four. They are sitting on a large fleet of conventional power plants designed to run for decades, and there is less and less demand for this power. Their strategy will therefore not be to increase their already small investments in renewables (which would only speed up the process), but to increasingly export power to Germany’s neighbors.