Germany has been criticized for the impact of its energy transition on Poland, the Czech Republic, and Switzerland, all of which charge that uncontrolled surges in renewables are destabilizing their grids and/or reducing the profitability of conventional power firms. As part of a four-part series, Craig Morris discusses a recent study on this matter conducted by the German Institute of Applied Ecology (Oeko-Institut).

At the end of January, the Institute published “Impacts of Germany’s nuclear phaseout on electricity imports and exports” (PDF), a 99-page study that discusses not only German power flows with its eastern neighbors, but also with its neighbors to the west.

This study comes at a time when Poland and the Czech Republic are both openly complaining about Germany using their grids to transport renewable power from northern Germany to southern Germany – because the German grid is allegedly overloaded. Likewise, Switzerland recently argued that it’s conventional power firms were not able to generate as much power as they should because the Swiss grid is also sometimes filled up with German renewable power.

Interestingly, the Dutch have also seen their grid flooded with inexpensive renewable power, which has offset electricity production from natural gas turbines in the Netherlands, but the Dutch have not complained as loudly as the Swiss. Fortunately, the study explains why. 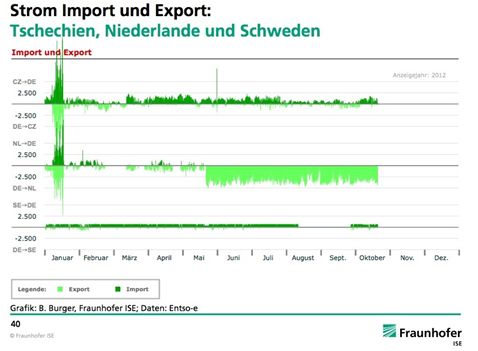 As this chart shows, the Netherlands began importing much more electricity from Germany than the Czech Republic starting in May.

In addition, the study addresses the general question of whether the phaseout of nuclear power is forcing Germany to import more electricity – including nuclear power – from abroad.

A year ago, I pointed out (PDF) what lots of others were also saying: Germany cannot increase its imports of nuclear power much because nuclear plants generally run at full capacity all the time and therefore cannot be ramped up much further.

This study puts a finer point on this message, showing that in fact Germany and its neighbors do not trade power based on any shortage, but rather based on pricing. As the executive summary puts it, “since 2003… Germany has historically always exported electricity in winter and imported it in summer.” The situation is still the same, which is a bit of a conundrum as power demand is greater not only in Germany, but generally in Western Europe, in the winter.

Furthermore, the study also makes a critical distinction between power flows (physical) and power trading (commercial) – a trap I fell into here. The difference comes about because power does not flow along the shortest distance between the two points of sale, but rather along the path of least resistance.

For instance, France exports quite a bit of electricity to Switzerland, but a lot of it flows through Germany. Indeed, power is sometimes traded from France to Italy via Germany (and Switzerland). Indeed, both the Swiss and the Italians seem to have strategically outsourced a large chunk of their power production to France in a shrewd strategy that seems to be, “We’ll take the nuclear power, but you keep the nuclear plants.”

And we are not talking about peanuts here. As the authors explain on page 57, the gap between commercial and physical flows from France to Switzerland across Germany appears to be “systematic,” with power flows exceeding commercial trading “on average by about 2.2 gigawatts” – equivalent to roughly 4-5 percent of average German power demand. It is also nearly half of the approximately 5 gigawatts that can be transported through Switzerland (see page 59). Only 2.4 terawatt-hours of the 20 terawatt-hours (12 percent) physically imported from France to Germany in 2011 was actually sold to Germany. 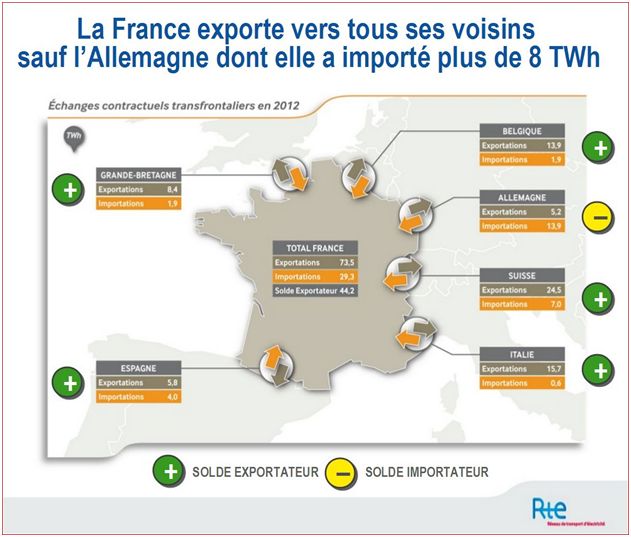 Switzerland and Italy have a tremendous and perhaps strategic power trade imbalance with France, and some of that electricity flows through Germany.

One conclusion (which the authors do not themselves explicitly draw) is that the German grid is stuffed full in the West because of all of this power trading between its neighbors. Some proponents of renewables have therefore responded to the complaints from Poland and the Czech Republic by arguing that renewables are not the culprit, but instead that power flows are simply shifted to the east within Germany.

In the next installment, I will discuss the distinction between commercial and physical power flows.