In Germany, the expansion of wind power collapsed by around 90% in 2019. In 2020 the solar industry is threatened with collapse. One other thing makes less headlines: Citizen energy has almost come to a standstill. Yet, the second European Renewable Energy Directive (RED II) of 2018 stipulates that citizen’s energy must be given special support. And Germany of all countries – once a pioneer in the field of energy for the citizen – has yet to ratify RED II.

The Renewable Energy Sources Act of 2000 (EEG) promoted renewables and in particular citizen’s energy – at least that is the common reading. In 2014, the EEG began switching from feed-in tariffs (FITs) to auctions, and the project pipeline shortened considerably.

In principle, auctions specify exactly the same conditions as FITs: the price for green electricity and the guaranteed grid connection. The difference lies in the role of the state. In the case of FITs, it dictates the prices, leaving the volume to the market; in the case of auctions, it dictates the maximum volume, leaving the pricing to the market. Auctions were introduced allegedly to reduce costs, but in reality they achieved this goal mainly by slowing down new projects. 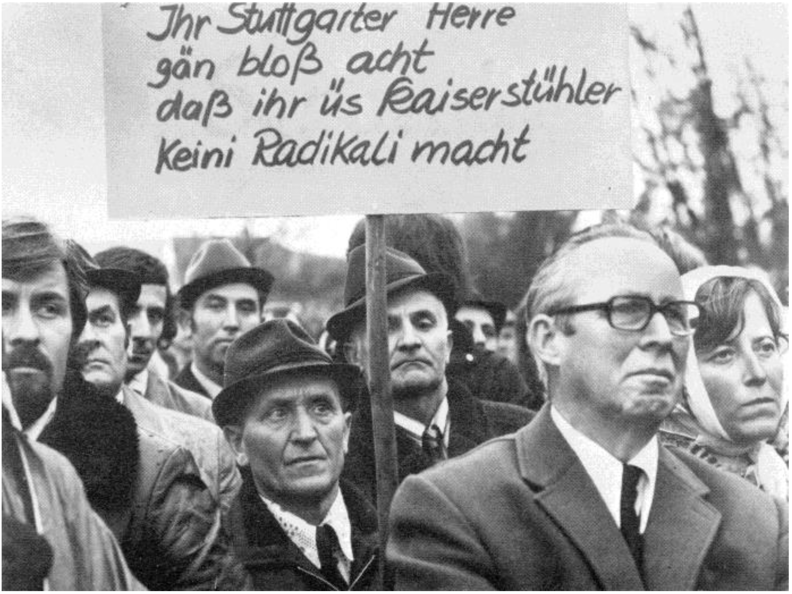 Protest against industrialisation in the Kaiserstuhl in the mid-1970s. Germany’s energy transition didn’t come from the left, but from below. Source: Nössler/De Witt, „Wyhl Kein Kernkraftwerk in Wyhl und auch sonst nirgends.“

If the market has collapsed under auctions, what can we learn from the past to move the energy transition forward?

The grassroots movement created the law, not the other way around

As recently as 2015, the large German energy companies that until 1999 had accounted for around 100% of investments in the energy sector made up some 10% of spending on renewables. The other 90% were new investors, half of them citizens (groups).

But the EEG of 2000 did not create citizen’s energy; the law just helped these citizens groups. The first EEG came out of a political revolution: in 1998, the red-green coalition was the first, and to this day only, coalition in which no party from the previous government was represented. 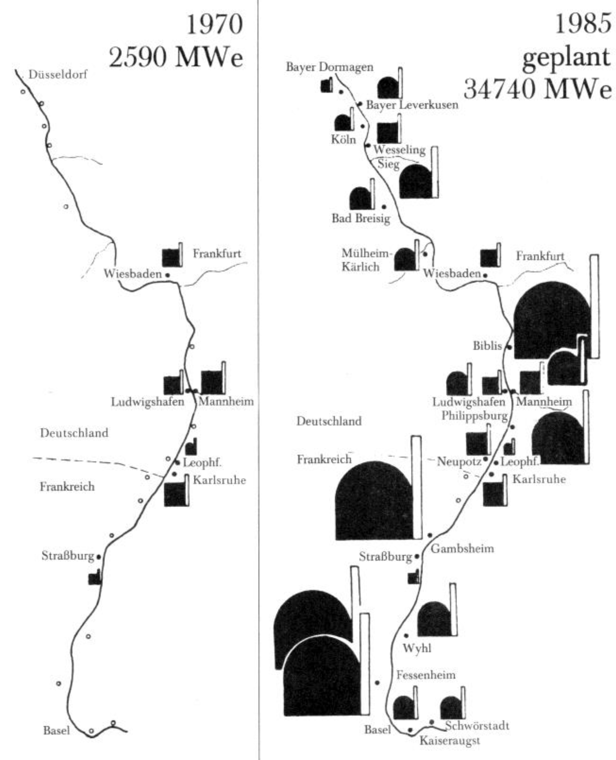 Flyer from the 1970s. Numerous reactors (rounded black blocks on the right) were planned but never built due to the protest; we only remember the one in Wyhl because the others never moved forward after the initial protests. The triangle of Alsace/Baden/Switzerland would soon have had the largest concentration of nuclear power worldwide.

In 2000, the EEG implemented at federal level what had already been tested at municipal level in several German cities (Aachen, Hammelburg, etc.) and abroad. In other words, the EEG was federal law – local politics.

This finding does not bode well for RED II. Feed-in tariffs have been used in around 100 countries around the world. In most cases, it has led to a rapid expansion of renewables, but nowhere has it produced a grassroots movement. A law probably can’t.

Best example? Ontario, where the German EEG was copied in 2009. But in Ontario, mainly internationally active companies got to work. In 2000, numerous citizen energy groups in Germany stood waiting at the starting line – for the business case – so that they could start running. When an EEG came for Ontario, fewer citizens stood at the starting line, so mainly the energy companies started running. For RED II, the question is: Do citizens in other countries demand the right to make their own energy?

The days before the business case

But back to Germany: What did these citizen energy groups do before the EEG gave them a business case? If you go back to the 1980s, they built the plants themselves, negotiated with the monopolistic supplier for a grid connection, and fought for a fair remuneration. The Electricity Feed-in Act of 1991 – the predecessor of the EEG (we will go into the differences in a later report) – provided some relief, especially for wind power. Before that there were mainly nice stories.

For example, a certain Heinrich Bartelt built an early Dutch wind turbine on his parents’ farm together with his brother at the end of the 80s. The official who reviewed the building permit thought the idea was great (“wind turbine” was not yet a category in land planning at that time) and said with a wink: “See that the fire brigade gets through at the farm.”

On the day of construction, however, representatives of the electricity supplier showed up. Although Bartelt had a building permit, the utility company refused to connect him to the grid. So his mom asked the gentlemen to come into the kitchen and have a proper conversation – and promptly poured a round of schnapps. One round became two and… dear reader, you can guess what happened next. “When we came back from the conversation, we had the connection,” Bartelt remembers today.

The only bone of contention was compensation. The power firm only wanted to pay 1-2 cents per kilowatt-hour. But Bartelt paid 9 cents for his household electricity and wanted the same amount for his emission-free wind energy. He did not get it – until the Feed-in Act of 1991, which at least guaranteed 90% of the household price: roughly 8 cents.

That was still far too little for solar. (The EEG of 2004 offered a good 50 cents for a kilowatt-hour of solar power.) However, a lack of a business case did not stop projects such as the solar roof from SC Freiburg. SC Freiburg had risen to the German premier league in 1994 and needed a new southern stand. 300 fans came together to finance a solar system on the roof. Two season tickets were raffled among the investors. “For many, that was the real incentive,” recalls Josef Pesch today, who now heads the cooperative that financed the system. In 1995, a return on investment remained out of reach; the money was more like donations than investments.

What kind of society do we want to live in?

These citizens and many others wanted to set an example. In Freiburg, many of them came directly from the nuclear power protest movement of the 1970s. For example, the solar roof of SC Freiburg was the idea of architect Rolf Disch, who as a young man had taken part in the protests two decades earlier.

Today, the role of the church back then is almost forgotten – as is the first reason for the protests. People were concerned about self-determination. “This rural area was to become the next Ruhr area,” says Johann Meyer, theologian at the University of Leipzig. Nuclear power was only the energy supplier in an industrialization plan. Meyer wrote a master’s thesis on the subject, and the title says it all: “The Protestant Church in Baden and the erosion of the promise of progress in the civil use of nuclear energy.” His findings? “The Protestant Church gave the protest movement a place to meet” – as it did in 1988-89 during the Monday demonstrations in the East, one might add.

Lisa Bender, pastor in training in Baden, also noted this aspect in her dissertation. “The opponents of nuclear power were politically weaker than the supporters”, she says. “Those who had power wanted these reactors”. So some Protestant churches became a meeting place for anti-nuclear activists.

Some church representatives had a different view of society. Bender remembers one argument they made: “If we could get as much energy from solar as we do from nuclear power, we’d have to be against it.” Otherwise, the exploitation of the Earth would continue.

The protests were not only about nuclear power, but also about the many industrial companies that were to be attracted to the region. The first customer for Baden’s nuclear power was to be a lead production plant in neighboring Marckolsheim (France). “People wanted to protect their homeland against the planned industrialization,” explains Bender, “and also protect the social fabric and way of life.”

In today’s terms, what would you like your emission-free future to look like? Flying taxis and e-cars powered by green electricity – or car-free cities with good cycle paths and public transport? Maybe with less money but more time to play the guitar in the park?

The trap of “listen to the scientists”

There’s also a message for Fridays for Future in this history: “listen to the scientists” is a trap. Johann Meyer sums up the dilemma in a nutshell: “In a way, blind belief in science and technology is experiencing a kind of revival. It’s as if science dictates to us what we have to do, and we are to implement it – without any political debate. This is typical technocratic thinking: the experts are supposed to take over, and we subordinate ourselves to their intellect.”

Climate experts agree on the problem – but not on the solution. Are nuclear power and geoengineering part of the solution? How many wind turbines do we need? Flying taxis or bicycles – research has no single answer, but many. So the solution to climate change can only be found by talking about our values: “What kind of society do we want? Natural science can’t answer that for us,” says theologian Johann Meyer.