Germany is often cited as Europe’s renewable energy wunderkind, and indeed many of its laurels are well deserved. But it is no means alone on the cutting edge of climate protection, and indeed of late the Teutons have fallen behind in places. Other European countries excel in specific areas, offering best practices for the rest of the continent and beyond. In the final analysis, though, the meta-champion is the EU, says Paul Hockenos.

Sweden is ranked number one in sustainability surveys, and on track to be the first nation worldwide to fulfill the UN’s SDGs, perhaps as early as 2030. Among its strongest suits is renewable energy – wind, bioenergy, hydroelectric – that accounts for more than half (55%) of gross energy consumption, followed by Finland (41%), Latvia (39%), Denmark (36%) and Austria (33%). It is determined to push up efficient energy use by 50% in the next decade and finish with a 100% renewable-energy supply in 2040. The newly re-elected leftist government should meet its target to achieve net zero greenhouse gas emissions by 2045.

Last year in May, Portugal ran the country for three days in a row on renewable energy alone and even managed to export power during the streak. Little known even in Europe, Portugal has a higher share of fluctuating renewables in its supply than Germany, and steeper clean-energy growth rates, too. Renewables are expected to cover 80% of electricity consumption in Portugal in 2030, a goal that a massive, ongoing roll out of solar PV will help facilitate. According to The Portugal News, Green energy currently saves the country around €750 million in fossil fuel imports.

“The growth of renewables in Portugal is now so fast that officials are questioning planned investments in gas infrastructure,” says R. Andreas Kraemer of the Berlin-based think tank Ecologic Institute. The rapid shift to renewables has endowed Portugal with “a wealth of experience in the operational management of grid, including forecasting,” he says.

Denmark, the cradle of European wind power, generates close to half of its electricity consumption (43.4%) from its stiff sea breezes.

And the Danes’ security of supply is among the highest in Europe at 99.995%. Denmark is home to Europe’s largest wind turbine maker, Vestas, and the most sought-after offshore wind farm developer, Orsted. Vestas has installed over 60,000 turbines across 76 countries.

The U.K. is home to 39 of Europe’s 105 offshore wind parks with a total of 1,957 operational turbines. Since 2016, the U.K. has generated more power from the wind (sea- and land-based) than from coal, its traditional mainstay.

The five floating turbines at Hywind Scotland Pilot Park are the first of their kind in operation. Hywind’s turbines are about 253 meters in height, about a third of which is beneath the water. Each of the towers is tethered to the sea floor by chains weighing in 1,323 tons. At full capacity, the park will generate enough electricity to supply 20,000 homes. 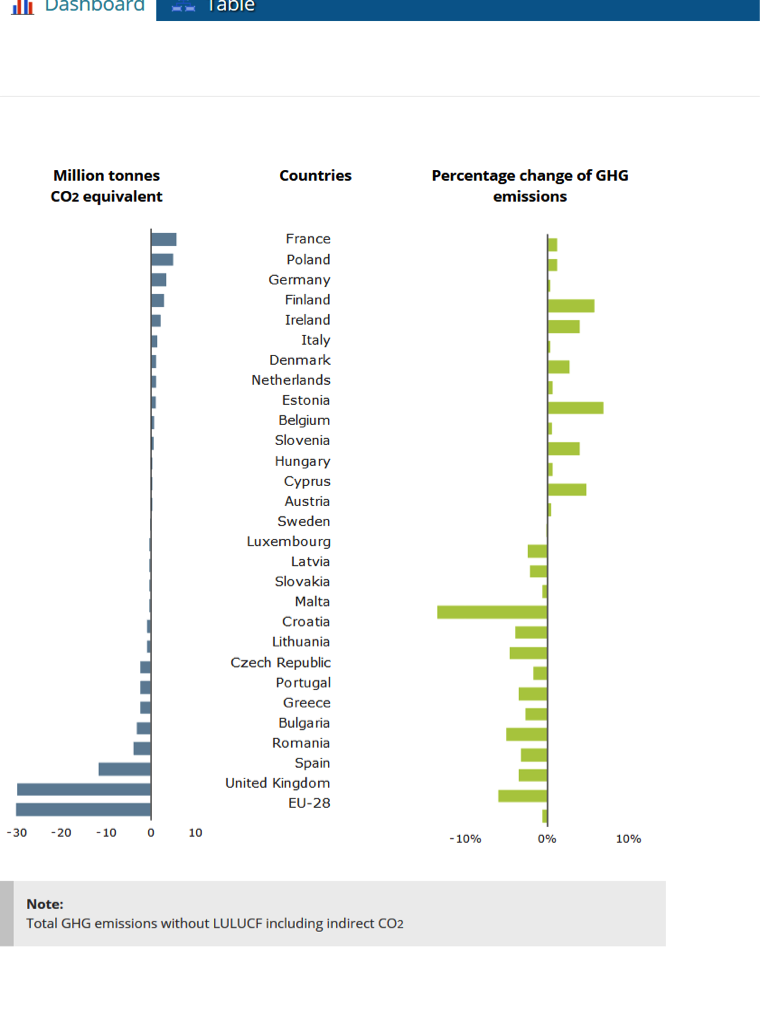 In 2017, the latest numbers available, the UK posted (in terms of absolute changes) by far the largest decrease in GHG emissions in the EU. The drop was a result of shifting from coal and natural gas to renewable energies. In relative terms, the largest decline happened in Denmark (5.3 %), followed by Finland (4.6 %) and the U.K. (2.6 %).

5. Norway: Future of the Fjords

The Norse capital of Oslo, and the rest of the country right behind it, is the hands-down world number one in electric transportation: half of all new car sales are electric or hybrid. And all new car sales should be zero emission by 2025 – the most ambitious goal in the world. Norway is also out in front on battery-powered shipping, a neglected sector until now. Its entire ferry fleet, which navigates the fjords and islands, is going electric, as are, more slowly, the larger tourist berths (see photo below of the electric catamaran Future of the Fjords.)

Downtown Oslo maintains that the only thing better than e-cars is no cars at all. The city center is largely car-free as of 2019, and apparently it’s working out fine, so far.

Oddly, Norway doesn’t have a car manufacturer today. The Nissan Leaf is the most popular all-electric automobile there.

6. The European Union: The Most Unsung Champion

The EU has led the way on so many climate and energy issues that its impact over the years vastly outstrips that of any one state or region. Europe’s renewable energy boom, for example, is unthinkable without the EU’s opening of energy markets and the prying apart of energy production and distribution sectors (called “unbundling“) in the 1990s. In Germany, for example, the dismantling of the energy-market monopoly of four giant utilities paved the way for tens of thousands of small producers, citizen’s collectives, localities, and cooperatives to forge ahead with renewable energy generation, known as the Energiewende.

The EU has pushed hard on many fronts, such as the stubborn transportation sector, where its directives on lowering emissions for cars and trucks sets the bar in Europe (much to the consternation of Chancellor Merkel and German automobile manufacturers.)

Among the most salient measures of all, last year the EU agreed that renewables must make up 32% of energy consumed in Europe by 2030 (binding target) and that by there be a 33% increase in energy efficiency. Thanks to its targets and pressure – as well as communism’s fall and the financial crisis — the EU as a whole has already hit its 2020 goal of sinking greenhouse gas emissions by 20% (compared to 1990.) And the EU has pledged that from 2021 to 2027, every fourth euro of the EU budget — one trillion euros ($1.2 trillon dollars) — will go toward climate protection.

For Europeans concerned about climate change, and polls show it’s the vast majority, these are solid reasons to back pro-EU and climate-serious parties in the May European Parliament elections.