The summer is drawing to a close in Europe, and it was one of the hottest ever. Thermal power plants (coal and nuclear) had to ramp down production in numerous countries due to a lack of cooling water, but the heat also affected solar power production. Craig Morris reports.

Low water levels and high temperatures, as the Middle Rhine experienced them this August, can force thermal power plants to reduce their output or shut down completely. (Photo by Franz Ferdinand Photography, CC BY-NC 2.0)

July was extremely hot not only in Europe, but worldwide; it may have been the hottest month in history – in a year that might also be the hottest ever. The situation was the same in Europe. June 2015 was the hottest ever in Germany, and only a cool end of the month prevented July from setting a new record. A new record high of 40.3 degrees Celsius (104.5 degrees Fahrenheit) was measured in Germany both on July 5 and August 7. Toss in a lack of rainfall, with large areas of Germany experiencing the worst drought in 50 years (largely in the south), and you end up with a challenge for thermal power plants. The situation affected Germany and neighboring countries.

The power sector was affected because nuclear and coal plants require large amounts of water for cooling. In combination with the heat wave, the drought meant that less water was available, and the water available was also warmer. Like the Germans, the Swiss begin to clamp down on the power sector if cooling water reaches 25 degrees Celsius (77 degrees Fahrenheit). That happened at the Beznau nuclear reactor on the Aare River, but Swiss officials allowed the plant to continue running with a temporary permit for up to 30 degrees Celsius (86 degrees Fahrenheit). For various reasons we will have to come back to in a future post, Switzerland temporarily shut down all of its nuclear plants in August, so the issue resolved itself. Likewise, Belgium is struggling with its nuclear fleet and partly filled the generation gap with gas turbines, which do not require significant water cooling, and with power imports from France and the Netherlands (Belgium does not have a grid connection with Germany). 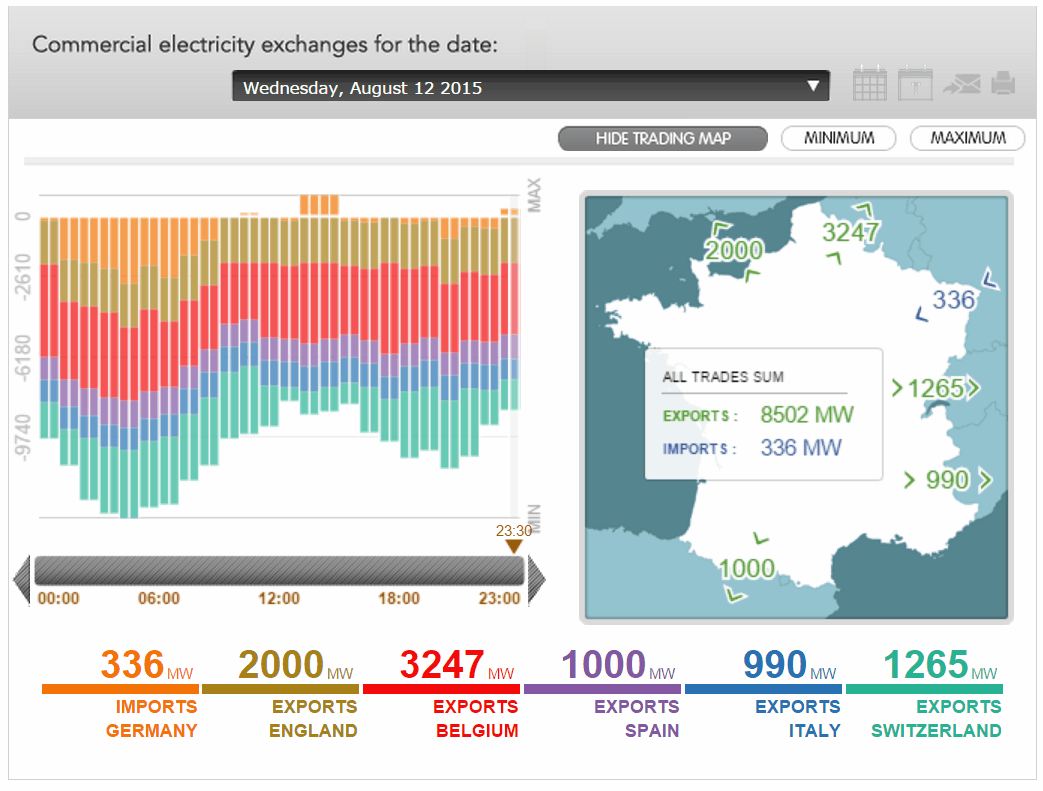 French power exports to Belgium were especially high during the heat wave partly because Belgim reduced its own nuclear power output. Source: RTE

In France, the heat wave led to power outages at the beginning of July when transformer stations failed. Otherwise, nuclear stations in the country ran at a slightly lower level at times as temperatures approached 28 degrees Celsius (82 degrees Fahrenheit); the French thus allow their waters to heat up more than the Swiss do.

The heat wave also affected coal plants. Poland had to restrict power consumption, so industry and businesses were told to conserve. Furniture chain IKEA stopped making so many meatballs in its Polish stores. The Poles get more than 90 percent of their electricity from coal plants.

And Germany? The country’s thermal power plants – both coal and nuclear – also had trouble. The Grohnde nuclear plant heated up the Weser River to 26.2 degrees; slightly higher temperatures would have led to a shutdown or at least a decrease of output, as in France. Grid expert Thorsten Zoerner says that, in Germany, power plants are not allowed to add any additional heat to a river that has already reached 25.5 degrees Celsius. The Donau reached that temperature at a time when two gas turbines in Irsching failed, he reports. He adds that the Rhine had also reached 25.1 degrees (77 degrees Fahrenheit), which would have affected two local power and heat plants – had they not already been off-line. The new Moorburg coal plant outside of Hamburg also had to switch to its modern hybrid cooling tower because the Elbe had reached 25 degrees (77 degrees Fahrenheit). But this option requires the plant to consume more electricity itself, thereby making it even more of a money loser.

One reason the situation wasn’t worse in Germany, of course, was the large number of solar arrays. But even their output is negatively impacted during heat waves; efficiency drops by up to 0.5 percent per degree Celsius – and the panel temperature counts, not the air. Fortunately, temperatures in Germany still do not rise as much as they do in Spain, where the effect was greater.

Overall, countries that have a lot of solar will be glad they built so much during heat waves and droughts. Ironically, there’s even a silver lining to lower PV efficiency at high temperatures: more PV can be installed without the need for storage. 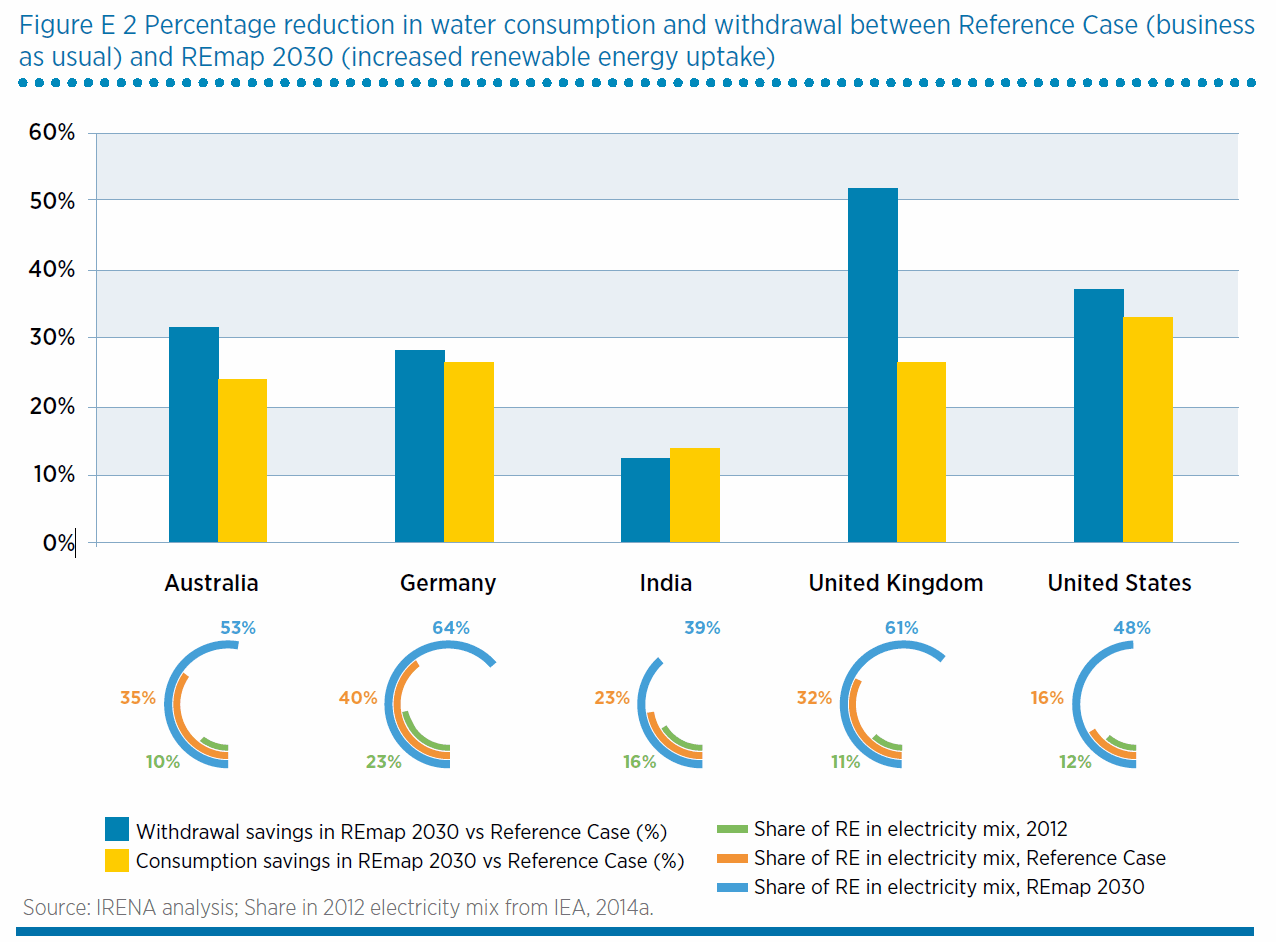 A transition to renewable energy will also reduce both water withdrawal and consumption. Source: IRENA

The high temperatures and dry spell also wreaked havoc on agriculture. The Swiss stole water from the French in late July to save some cows from dying of thirst, for instance (not exactly what people think of when we hear of wars over water). But there is one piece of good news: the weather was apparently perfect for wine production. Look for “2015” on those bottles of European wine over the next few years!